Maintaining The Culture of Creativity

Cartoonist Manu Cornet created a series of “organizational charts” for some of the biggest tech companies, based on their cultures. Google’s chart is absurdly complex but with a relatively clear hierarchy. Facebook’s is almost childishly simple and looping, as if no one’s in charge. In Microsoft’s, departments are sealed off and are depicted pointing guns at each other. It’s an apparent reference to the toxic culture that developed at the former industry leader after Bill Gates stepped down as CEO. Vanity Fair wrote about it in 2012:

At the center of the cultural problems was a management system called “stack ranking.” Every current and former Microsoft employee I interviewed—every one—cited stack ranking as the most destructive process inside of Microsoft, something that drove out untold numbers of employees. The system—also referred to as “the performance model,” “the bell curve,” or just “the employee review”—has, with certain variations over the years, worked like this: every unit was forced to declare a certain percentage of employees as top performers, then good performers, then average, then below average, then poor.

The article goes on to describe the short-term thinking and backstabbing the system encouraged. It also details the extent of Microsoft’s fall, from market domination to "also-ran" status. The headline — “Microsoft’s Lost Decade” — says it all.

If a culture of innovation could be imposed, every company would do it. A creative environment thrives organically — otherwise it’s not really a culture at all but a collection of rules and expectations. But it’s not simply a matter of recruiting for the right talent. Culture must be cultivated. Maintaining the right conditions for innovation is an ongoing effort.

Here are some of the lessons we’ve learned over 42+ years of innovating...

1. Trust and empower your people

In an interview on WCPN 90.3 FM, Dr. Akram Boutros, CEO of MetroHealth System, explained that when he joined the hospital in 2013, he saw boosting staff morale as key to improving patient care. “One of the things people can’t stand,” he said, “is to be irrelevant. It is so empowering to be relevant. When somebody feels that they are relevant, they outperform.” He attributes high performance to MetroHealth’s becoming the first hospital in the world to achieve the Healthcare Information Management and System Society’s highest honor for electronic medical record-keeping.

People feel relevant when they’re trusted to make decisions and act on them without excessive oversight. Innovation requires risk. Risk requires trust. When people are worried that mistakes will hurt their careers, they take fewer chances. They’ll try to get by on tweaking old ideas, rather than dreaming up new ones. Business writer Daniel Pink lists autonomy first among the factors that, according to research, fuel motivation in the workplace.

“Autonomy is our desire to be self-directed, to direct our own lives. In many ways, traditional notions of management run afoul of that. Management is great if you want compliance, but if you want engagement … self-direction is better.”

Relevance also comes from recognition — and not just of home runs, but base hits and clutch fielding. Writing in Fast Company, HR consultant James Brook states:

Recognition and praise are crucial to building a positive, high-energy working environment and can have a more powerful motivational effect than monetary rewards, provided compensation policies are fair, transparent and market-related. Business leaders who recognize small wins and personal bests as well as major achievements will motivate their staff to go the extra mile and outperform. After all, it is these smaller wins and noteworthy performances that fuel major breakthroughs and company-wide excellence.

2. Throw out the org chart 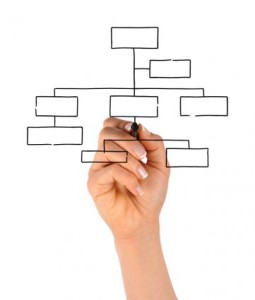 In the corporate world, the pyramid-shaped hierarchy is supposed to allow information to flow up from the rank and file to the CEO, and decisions to flow down. The problem, however, is that the higher one rises in the organization, the fewer opportunities remain for further advancement. Competition is inevitable, and while competition can bring out the best in people, it can also bring out the worst, as Microsoft’s recent past demonstrated.

Nottingham Spirk’s Vertical Innovation process relies on a flat management structure and a team-based approach to projects. The former might be difficult to replicate elsewhere, but the latter shouldn’t be.

When projects are developed by teams — rather than handed off from department to department, assembly-line style — then the team can be tailored to what the project requires. This also helps to blur the lines between designers, engineers, marketers, etc., and that’s a good thing; it keeps the project front and center, ahead of concerns about who will get credit or blame.

Apple operates in a similar way, according to former senior designer Mark Kuwano:

“It’s not this thing where you get some special wings or superpowers when you enter Cupertino. It’s that you now have an organization where you can spend your time designing products, instead of having to fight for your seat at the table, or get frustrated when the better design is passed over by an engineering manager who just wants to optimize for bug fixing. All of those things are what other designers at other companies have to spend a majority of their time doing. At Apple, it’s kind of expected that experience is really important.”

In trying to turn around struggling toy manufacturer Mattel, CEO Bryan Stockton identified a problem hiding in plain sight: endless, and often pointless, meetings. He issued guidelines to limit meetings and focus their objectives. It was too little, too late — Stockton resigned a few weeks later after a miserable fourth quarter — but few would argue that his concern was misguided. A report around the same time noted that according to a survey,

John Spirk is fond of this comment from management consultant and writer Peter Drucker: “Most of what we call management consists of making it difficult for people to get their work done.”

In maintaining creativity, a culture of innovation can’t be established with a memo. It requires longterm thinking and ongoing maintenance. The keys, trust and empowerment, can be difficult for organizations with a history of compartmentalization and tight management practices. But in an increasingly complex business environment, the companies that take these risks will reap the rewards.