Note: This commercialization article was originally published by the National Academy of Inventors in Technology & Innovation (20.4), and was one of their most popular downloads. Available in full on Ingenta.

In 1973, a young Israeli man named Yoram Rudy arrived in Cleveland, Ohio, to join the Biomedical Engineering Ph. D. program at Case Western Reserve University (CWRU). At CWRU, Rudy met Dr. Robert Plonsey, an electrical engineer who had become a pioneer in the field of bioelectric phenomena. Plonsey guided Rudy’s research, which would lead him not just to his doctorate but also to serving on the CWRU faculty and founding the interdisciplinary Cardiac Bioelectricity Research and Training Center. Now the director of the interdisciplinary Cardiac Bioelectricity and Arrhythmia Center at Washington University in St. Louis, Dr. Rudy’s work continues to untangle the mysteries of cardiac arrhythmia, which results in more than 400,000 sudden deaths every year in the U.S. alone. 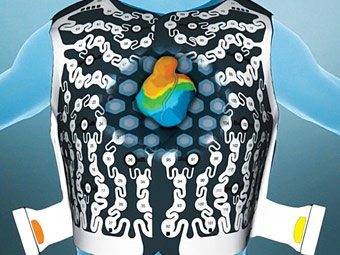 In the early 2000s, Rudy and the CWRU graduate students who had been assisting with his research brought the first working electrocardio monitoring vest to Nottingham Spirk (NS), a business innovation firm and neighbor to CWRU in Cleveland’s University Circle district. It was a Frankenstein prototype—15 pounds, bristling with wires, and nowhere near ready for clinical trials, much less manufacturing. But from that working model, NS’s designers and engineers built what came to be known as the EC VUE™, a lightweight, single-use vest with 252 sensors precisely spaced for optimal readings regardless of body type. It is the first non-invasive mapping system to provide simultaneous, 3-D, multi-chamber mapping and localization of cardiac arrhythmia. Rudy’s students, Charu Ramanathan, Ph.D., and Ping Jia, Ph.D., launched a company around this technology. In 2015, that company, called CardioInsight, was acquired by Medtronic in a $93 million deal.

The Intersection of Academia and Commercialization

The money, however, is not the point. The EC VUE vest is a rare “lab to market” success story. In our experience, precious few viable products result directly from academic research. More than $5 trillion has been spent in the U.S. on research and development in the past 20 years, much of which went to secure patents that remain unlicensed. In fact, fewer than 5% of the more than two million active patents have been commercialized.

When scientific discoveries do lead to innovations, it’s usually because the knowledge was “pulled” out of the lab — meaning that someone outside the field saw a potential application for the knowledge, perhaps in ways scientists never anticipated. Examples of this type of activity include Mercedes basing the design of a concept car on the boxfish, an oddly shaped but quick and maneuverable reef-dweller, or a materials scientist who was asked by the Navy to find a way to reduce algae growth on ships and submarines looking
to sharkskin for a solution.

It is much less common for discoveries to be “pushed” out, meaning that there is a relatively straight line from insight to product. One famous example of this is the fabric fastener commonly known by the brand name Velcro®. It was developed by an engineer who decided to figure out why burrs always stuck to his clothes and to his dog when they walked in the woods. A more modern example are SLIPS — slippery liquid-infused porous surfaces. Inspired by the carnivorous pitcher plant, SLIPS are being studied for uses as mundane as getting the last bit of ketchup out of the bottle and as important as preventing the buildup of ice on airplane wings and barnacles on ships.

An invention is just the first step in a long journey, one that few without the financial, staffing, and equipment resources of a Fortune 500 company can make. In every market, there are barriers to entry. Companies know or can figure out how to overcome those obstacles, but, generally, industry and academia do not talk to each other. Companies and universities have little in common; most of their priorities, challenges, and goals are dramatically different. Sometimes, however, interests will align, and ongoing dialogues bring those opportunities to light.

NS has been building relationships with universities for most of our 47-year history. In addition to CWRU, we have worked in a variety of ways with the University of Akron (we are sponsoring a biomimicry fellow from the school’s Integrated Bioscience Ph.D. program); Cornell’s Weill School of Medicine; Penn State; and Washington University of St. Louis.

This history of building relationships is part of the reason that 95% of the more than 1,250 patents NS has secured for our client partners have been commercialized. We do for inventors, and for many companies, what they very often cannot do for themselves: undertake all of the steps necessary to research markets; identify the most viable opportunities; design, build, and test prototypes; organize clinical trials; find the most suitable supply-chain logistics and manufacturing partners; conceive and roll out marketing plans; and prepare exit strategies.

3 Key Elements of Getting a Product from Creation to Commercialization

All Resources Under One Roof

NS is able to accomplish all of this because we maintain on-site all of the resources needed for vetting, customer insights, design concepts, feasibility prototypes, engineering layouts, production prototypes, design-for-manufacturing, factory sourcing, branding, and market launch. Maintaining these resources in-house at all times is the key to the Vertical Innovation™ process. We rarely outsource work and never hand off a project from one department to the next. Our project teams include representatives from our various departments, and they work side by side from start to finish. We find that the silos necessary for scientific work are not suitable for innovation development.

The scientist’s job is to increase knowledge: to answer the questions we already have and discover what questions we should be asking next. Our job is more specifically focused. We gather knowledge gained by a wide range of scientists past and present and try to find applications for it that make people’s lives easier, safer, or more fulfilling.

Science historian James Burke considers scientists and technologists “the true driving force of humanity.” But he also argues passionately for “an alternate view of history,” in which progress results not from the occasional great strides of breakthrough discoveries or inventions but from the many small steps taken by countless other people, often in directions the scientists and technologists never could have anticipated. In his book Connections, he wrote about why the telescope was not developed until three centuries after the invention of glass lenses for magnification.

In many cases, there are times when an invention is technologically possible — and in which it may indeed appear necessary, as the telescope may have — but without a market, the idea will not sell, and in the absence of the technical and social infrastructure to support it, the invention will not survive.

Learn more about Nottingham Spirk's expertise with commercialization, as well as our innovation approach.

Contact Nottingham Spirk to discuss how to get your innovation commercialized in under 24 months.