Relationships, trust, and common purpose are the fundamental elements of business innovation. 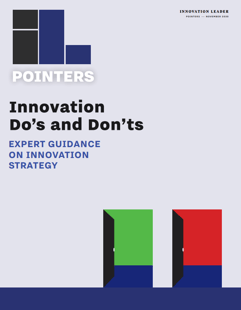 This article was first published in the November 2020 "Pointers" ebook from Innovation Leader.

In the 1960s, Marvel Comics was struggling. Editor Stan Lee was writing a dozen or more titles at a time. Out of necessity, he stopped writing the extremely detailed scripts that had been the norm in the comics industry from the start, and instead wrote one-page plot outlines. The artists were now empowered to make crucial storytelling decisions. In a 2016 profile of Lee, the culture publication, Vulture, called the Marvel Method “an artistically fertile game-changer.”

“Drawing comics from a script was absolutely paralyzing and limiting,” said artist John Romita, Sr. “When you had the option of deciding how many panels you’d use, where to show everything, how you pace each page out, it’s the best thing in the world. Comics becomes a visual medium!”

Characters who emerged from Marvel’s process—Iron Man, Thor, The Incredible Hulk, Spider-Man, the many X-Men—changed the comics industry, and are now the foundation of a movie franchise that has grossed over $20 billion from the box office alone.

Over nearly 50 years, Nottingham Spirk has seen time and time again the power of small, nimble teams that are assembled in the spirit of collaboration and trust.

When projects are developed by teams—rather than handed off from department to department, assembly-line style—the teams can be tailored to what the project requires. This also helps to blur the lines between designers, engineers, marketers, etc., and that’s a good thing. It promotes cross-pollination of ideas and keeps the project front and center, ahead of concerns about who will get credit or blame.

Our associates typically serve on more than one team at a time. This offers several benefits: It provides opportunities for different people to step into leadership roles; it maintains a balance of stability, which people need to focus, as well as to combat complacency and boredom; and it increases the cross-pollination of ideas and perspectives, which is crucial to creative thinking.

X, Alphabet’s so-called “moonshot factory,” operates in a similar way. According to a profile in The Atlantic, people whose projects have ended join the Rapid Evaluation team, which offers input on all other projects, until a new team needs their services. The article compared this to the Hollywood studio system: “Like MGM in the 1940s, it employs a wide array of talent, generates a bunch of ideas, kills the weak ones, nurtures the survivors for years, and brings the most promising products to audiences—and then keeps as much of the talent around as possible for the next feature.”

Retention may be the most beneficial result of this system. We’re very proud of the fact that the average tenure at Nottingham Spirk is 15 years. That’s rare in creative industries.

There are three key elements to the team approach, and we believe that any company can adapt these to increase its capacity to innovate.

Not long ago, we interviewed someone for a position at Nottingham Spirk. His resume was impressive, but he blamed a former employer’s failed projects on their refusal to heed his advice. Presumably, he thought this made him sound competent, perhaps even visionary, but it set off alarms. Assigning blame is the flip side of taking credit, and both are incompatible with what we’ve learned about teamwork and its vital role in driving innovation. 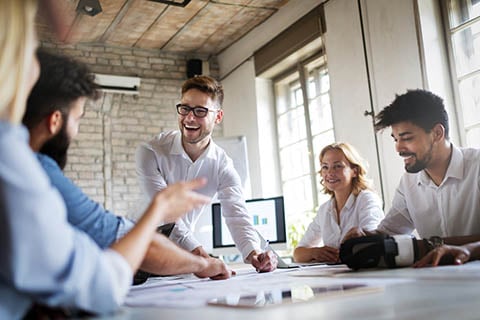 Skills are important, of course, but they are not more important than the ability to adapt and contribute to your culture. Dan Coyle, author of The Culture Code: The Secrets of Highly Successful Groups, advises against hiring what he calls “brilliant jerks.” The harm they do to culture usually exceeds their value.

Small, multidisciplinary project teams require a certain mindset. Trust is the single most essential element. All members must feel confident that they will be heard. As novelist and professor Isaac Asimov once wrote about brainstorming sessions, “First and foremost, there must be ease, relaxation and a general sense of permissiveness. … All people at a session [must] be willing to sound foolish and listen to others sound foolish.” Some “foolish” ideas uncover truths that weren’t revealed before. We encourage contributions that begin with the words: “This might be crazy, but…”

Multidisciplinary project teams also maximize cognitive diversity—differences in perspective or information processing styles—which research has linked to effectiveness in problem solving. For example, from a role perspective, designers and engineers tend to think differently not just because of their training, but because of long-standing personal traits that led them to those careers in the first place. They work best together when neither one is dominant. 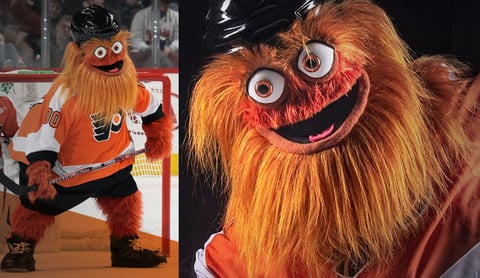 You don’t have to be a hockey fan to have heard of Gritty. Released into the wild in September 2018, the manic mascot for the Philadelphia Flyers was a literal overnight online sensation. He generated an estimated $160 million in free exposure in the first month.

Gritty is a great example of a successful product launch. The Flyers assembled a team, including outside collaborators, and gave those people room to operate. That has continued, to capitalize on Gritty’s social media presence—which includes hundreds of thousands of followers across platforms. His social media team has tremendous freedom and can act quickly because they don’t have to run everything up the chain of command for approval.

People feel relevant when they’re trusted to make decisions and act on them without excessive oversight. Innovation requires risk. Risk requires trust. When people are worried that mistakes will hurt their careers, they take fewer chances. And at that point, you as a manager will be fielding lots of “check-the-box” ideas as opposed to ones that have breakthrough thinking. Business writer Daniel Pink lists autonomy first among the factors that, according to research, fuel motivation in the workplace.

But many companies are far more concerned about efficiency. Finding faster and less expensive ways to do everything is deeply ingrained, and often plays a significant factor in determining compensation and promotions. Innovation, however, is not a tidy, linear process that maps itself readily to these kinds of scorecards. It can seem messy, chaotic, and plodding at times. Helping partners with traditional corporate cultures understand this, and to make adjustments in support of the ambiguity, is as important to our work as design and engineering.

We keep our teams small so that the project does not get bogged down under the weight of too many opinions. But when necessary, we can assemble an entire department to tackle a particular challenge. Everyone understands that innovation is not a predictable, linear process; sometimes you have to drop what you’re doing and lend a hand to another team’s work. 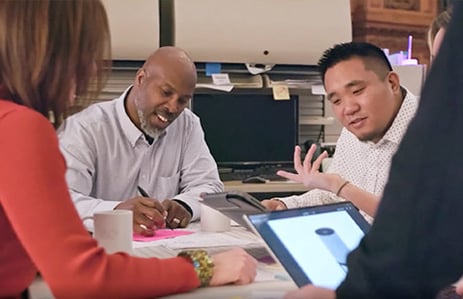 At NS, we are full of self-starters. It may seem overwhelming at first, but there will always be someone who can back you up or share advice. We are a team of teams here.

On the client side, we explain that nothing holds innovation back more than a lack of appreciation for the level of organizational and cultural shift that’s often necessary to support all the critical stages required for success—including commercialization, marketing, and sales. The company has to support the innovation over the long term, treating it as a full-class citizen within the larger, pre-existing product portfolio.

These realignments require support from the C-suite. But the leadership has an even more important role to play in shaping the culture that makes innovation possible. Trust within teams is only possible when the larger organization demonstrates trust for its teams. This is why our leadership team offered unlimited discretionary paid time off. If our associates trust us to lead them into the right direction, then we need to trust them as well.

This can be difficult for organizations with a history of compartmentalization and tight management practices. But in an increasingly complex business environment, the companies that take these risks will reap the rewards.

Relationships, trust, common purpose—these are the fundamental elements of business innovation. What are you doing to build them in your company?