Maintaining culture when everyone is scattered and stressed is difficult, but not impossible.

The bouts of physical and mental exhaustion that many people have experienced during the pandemic have been attributed to various causes, including stress, sleep disruptions, and “Zoom fatigue.” Dr. Ben Kearney has another hypothesis: our separation from family, friends and even co-workers.

“I think what makes us the most tired is that our bodies are disconnected from each other,” says Kearney, a psychologist and chief clinical officer for mental health services provider OhioGuidestone. “This is just a hunch, but it makes sense to me because we don’t get the same level of attunement over computer screens.”

Attunement is intuitive, nonverbal awareness of other people’s thoughts and emotions. Millions of years of evolution shaped social animals, including humans, to crave interaction with others. In fact, our brains reward us for it, by releasing natural opioids. But Kearney believes we’re getting less of that reward because video conferencing is a poor substitute for face-to-face meetings. Spoken language is relatively new, evolutionarily speaking, and we still glean a great deal of information from and about each other through nonverbal communication like facial expression and body language. When we’re separated, it’s much harder to attune.

“I think our bodies are experiencing an under-responsiveness to relationships,” Kearney explains. “And I think that’s one reason why we’re tired.”

Leaders of organizations that have expanded remote work in recent months, or perhaps embraced it for the first time, need to be mindful of the profound effects that separation can have on people and productivity.

Mark Fleming, (former) Senior Vice President for Business Operations and Development at Vitamix, believes in the importance of unplanned conversations and has made an effort to replicate office interaction as much as possible online.

“I get the team together [through video] on a more regular basis now,” he explains. “It’s not that we need to have more meetings to get the work done, we’re having more of them to really ensure that rich conversation is occurring.”

At most meetings, he adds, the first several minutes are devoted to chatting about non-work topics like families and vacation plans. And so far, it’s working.

“We survey our employees often on a couple of key factors that show engagement,” Fleming says, “and since sending people home for COVID, the way that we have been handling meetings and the way that we’re getting projects done has actually improved what already was a fairly high score on engagement and the outlook of the future of the company. They’re getting more communication than they had before.”

“We found that we didn’t skip a beat on any of the projects that we’re working on. So we’re going to be launching a bunch of different products in the course of the next three or four months. And on all of those projects, we are on time or at most two weeks delayed.”

Forging ahead despite the challenges is part of Fleming’s philosophy of building organizational resilience, which he discussed in a Nottingham Spirk webinar in April.

“Resilience is about setting goals and moving forward and translating failure into positive intent,” Fleming says. “So when you look at innovation, isn’t that exactly what you’re doing? You’re getting outside of your comfort zone, you fail, you figure it out, you succeed and you build up enough successes to where you actually bring something new to the world.” 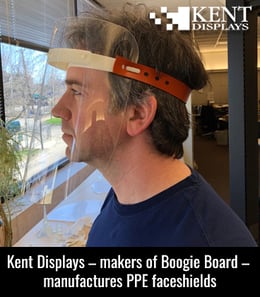 At Kent Displays, CEO Asad Khan closed his offices a week before the State of Ohio imposed stay-at-home orders. Communicating with his office in China, he understood perhaps better than most what was coming in the U.S. But he quickly pounced on an opportunity to rally his team around an important project: manufacturing face shields for first responders.

“We became an essential business,” he says. “We have this supply of plastic material and we have a roll-to-roll production capability. So far, we’ve shipped about half a million face shields to customers, and it became another thread tying everyone together. We’ve had a lot of ‘rah rah’ about it, even though everyone was at home.”

“It’s very critical to continue to make those connections,” Khan continues. “We have a very hallway culture, an extremely matrixed organization where we don’t have silos. We interact with each other a lot, and we also grow to like each other and to depend on each other, not just at work.”

Video meetings helped bridge the divide, personally as well as professionally. “I would create a meeting just to check in with people, to hear what they’re doing, a little bit of a sanity check,” Khan says. Some employees started a running group as a safe way to get together.

“At Vitamix, many are still working remotely and will continue to do so for the foreseeable future,” Mark Fleming explained. “We’re reviewing which functions are done best in the office and which are done better wherever you choose to be.”

The Kent Displays team is back on-site, but with lots of modifications, like Plexiglass between cubicles and limits on the number of people in a room. “It would take me 10 minutes to tell you what it takes to enter our building,” he jokes.

Dr. Kearney of OhioGuidestone is hiring food trucks so that small groups of staff members can have a socially distanced lunch together outside. He also holds two video coffee breaks every week, open to all, to talk about anything but work.