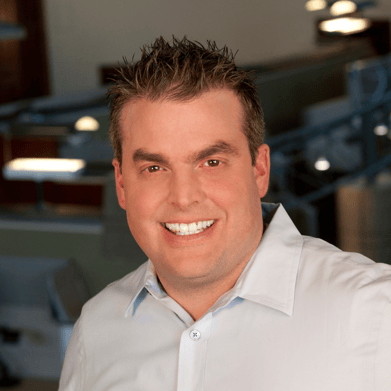 John is a graduate of Cleveland Institute of Art. Prior to NS, he worked at Lear Corporation, which manufactures automotive seating and electrical systems, and General Motors, where he worked on the Camaro and Corvette.

I’m a designer by trade, but I like the whole product development process. So I moved into a product management role, so I could be involved from the beginning, the research and discovery, to the end, commercialization and working with manufacturers. I’m always switching gears mentally, which I like. I also like the diversity of the projects. We’re constantly working on things we never worked on before. With each new project, it’s like starting a new job, but with being equipped with all the experience from all the other projects.

What are you working on?

One of the things I'm working on right now is a wearable audio device. The concept was inspired by people who like to listen to music but also like to be active, and do not want to have their ears blocked. They want to hear their surroundings and want the ability to talk to people while they’re being active and exercising. It’s an interesting product because some people love it and some are just completely turned off by it. Those that have issues with the concept don't like the idea of broadcasting what they're listening to. In the 1980s, we all had our speakers and cassette decks and were all blaring our music out, but people are a lot more sensitive to that now. So, it’s an interesting project and one where we will need to apply a balanced approach.

What else is on your radar right now?

When apps just began to come out, everybody loved to say, “there’s an app for that.” Now we're getting apped to death. So, I think part of our marching order is to figure out how to solve that, because people are beginning to get discouraged by the Internet of Things, because there's just so many apps. It’s like when we had separate remotes for our TVs, our cable boxes, our DVD players. It’s like that now with apps, but on steroids. And it’s not like choosing, say, a toaster. The research process and the point of purchase are completely different. People get exhausted, and they end up just choosing something, and if they don’t like it, they feel stuck with it.

Sometimes clients come to us because they want to get involved in products different from their existing product line, for whatever reason — it’s becoming obsolete, or their client base is getting older, or tastes are changing. We’re working with a client now that makes products that require a fuel source. They’ve developed a new kind of fuel source, and we’re helping them figure out ways to implement this new technology in new products that will sell. And we found an adjacent category for them with a lot of potential.

Sometimes you need permission from customers to do this. You have to ask, is this a good brand fit for us? Do you trust us to make this? We deal sometimes with companies that want to make a really radical change. We’ll do insights studies where we ask people, what do you think about this brand making this type of product? Would you trust them? Like I said, it’s like asking permission. And sometimes we have to tell clients we’re not sure people are going to trust you as a brand in that category. Wait a minute, you used to make washers and dryers, and now you’re making cars?

We’re recently collaborated with Enerco, which makes the portable heater brand Mr. Heater. It’s very popular with the outdoor market, including those who camp and fish. Enerco wanted a Gen 2 version that you could use for other applications beyond heating, like cooking. This was inspired in part by what customers were doing themselves to the heaters, with wire and aluminum foil. These weren’t the safest concoctions, but they showed how customers were identifying a problem, like having too many things to carry when you go camping, and how Enerco could solve it for them.

We learned about the customer hacks during our deep dive into online forums, social media, blogs, etc. That’s always part of our insights process, to help us understand how customers relate to products. It amazes me how much time people put into demos that they post on YouTube.

But there’s no online substitute for just walking around stores. I try every month to take a half-day to browse in a physical retail store. Shelf space in a brick-and-mortar retailer is a premium, so if a retailer is choosing to stock an item, it needs to have real demonstratable value. I would sometimes talk to people about what they’re buying, and most people are very receptive to it. It’s funny, sometimes they’re in the zone, because there are so many options for everything. I want to know how they’re making decisions. Those are experiences that you just can't get from doing research online. Not every product has a TV commercial or a social media presence. Walking through stores helps you find things you wouldn’t otherwise.