Shattered Glass: The Value of a "Soft Launch"

In May 2013, Bloomberg News declared that Google was “winning the innovation war against Apple.”

Google is winning this war because it has a better innovation process. The key to Google’s process is its “launch and iterate” approach. This means almost every new product the company puts out—including the ones announced last week—are introduced as a test. Based on early user feedback, Google makes adjustments and continues with either additional testing or a “soft launch,” where the product continues to be expanded at its own pace.

A year and a half later, Google has halted sales of one of those softly launched innovations, Google Glass. In its announcement, Google said, “Well, we still have some work to do, but now we’re ready to put on our big kid shoes and learn how to run.” The question is, are they running to new ideas, or away from the debacle that the Glass release became? In a subsequent quarterly earnings call, comments  from Google’s CFO hinted that the future of the Glass project is far from certain. 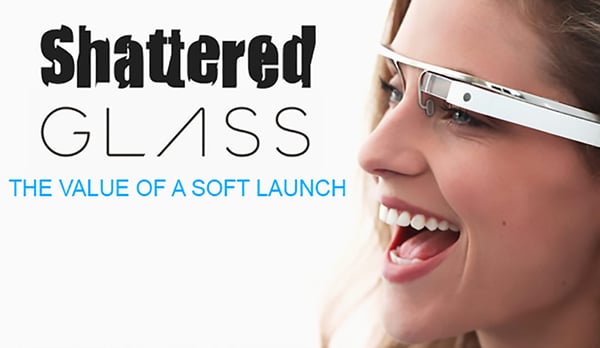 In hindsight, Google’s first mistake in the rollout of Glass might have been announcing that wearers would be known as “Explorers.” The ostentatious name, coupled with the selection process for getting one, seem almost intended to incite a backlash. Shortly after Google encouraged prospective explorers to apply via Twitter (using #ifihadglass) for the privilege to pay $1,500 for a Glass, media and pop culture blog Gawker unleashed weapons-grade scorn on both the company and the people clamoring to be part of this public experiment:

Glass is a wearable computer eye piece, which allows you to snap photos, read the news and do Google searches all while looking like an extra from the dance club scene in The Matrix. … Is Glass The Future of Computers or a Privacy Nightmare? I am not concerned with these questions. Instead I’m concerned with a much finer point: People who wear Google Glass in public are assholes.

The author bases his case on Atlantic writer Ta-Nehisi Coates’ “working definition of an asshole — a person who demands that all social interaction happen on their terms.” And language aside, he makes a fair point: Glass is invasive. People around a Glass wearer have no way of knowing if they’re being photographed or recorded. In an essay titled “I, Glasshole,” a WIRED writer who wore Glass for a year described the hostility he encountered nearly everywhere he went.

My Glass experiences have left me a little wary of wearables because I’m never sure where they’re welcome. I’m not wearing my $1,500 face computer on public transit where there’s a good chance it might be yanked from my face. I won’t wear it out to dinner, because it seems as rude as holding a phone in my hand during a meal. I won’t wear it to a bar. I won’t wear it to a movie. I can’t wear it to the playground or my kid’s school because sometimes it scares children.

It is pretty great when you are on the road — as long as you are not around other people, or do not care when they think you’re a knob.

When I wear it at work, co-workers sometimes call me an asshole. My co-workers at WIRED, where we’re bravely facing the future, find it weird. People stop by and cyber-bully me at my standing treadmill desk.

Do you know what it takes to get a professional nerd to call you a nerd? I do. (Hint: It’s Glass.)

The cause was not helped by the handful of Explorers who, internationally or not, lived up to the insulting nickname. Google itself wasn’t much better. Even while it issued suggestions to Explorers (including a reminder not to be “creepy or rude”), Google contributed to the problem with a series of tone-deaf moves: putting Glass on runway models at New York Fashion Week, lending them to Vogue for a spread on “futuristic” fashion and launching a Diane Von Furstenberg line.

This at a time when income inequality had become one of the most important news and political topics in the world, and two pop hits that were inescapable for months — “Royals” by Lorde and Macklemore’s “Thrift Shop” — mocked overt displays of wealth and status.

The WIRED and Gawker writers both concede that Glass or something like it will be commonplace in the foreseeable future. Wearables generated the most buzz at CES in January. But nothing on the horizon seems likely to push all the wrong buttons the way Glass did. And in terms of processes, it will be interesting to see if how Google proceeds with another "Soft Launch."

“There were plenty of bugs yet to be worked out and the mere existence of the Explorer program was a very public acknowledgment of that fact,” wrote Digital Trends. “This, naturally, is one of the relative downsides of Google’s transparency. And it’s no doubt one of the reasons Apple keeps its lips so tightly buttoned with regards to hardware releases. Some buggy missteps aside, the company has a lot invested in the idea that its products enter the world as fully-baked representations of Apple’s flawless ecosystem.”

Apple’s staggering growth has been based on giving people products they didn’t even know they needed until they tried them. Glass was supposed to catch on like that, but it didn’t serve any particular purpose — at least not any worth $1,500. And wherever Glass is headed, the comparisons to Apple products and methods won’t end. Apple veteran Tony Fadell, who designed the truly disruptive iPod, is now overseeing the Glass 2.0 project.

The problem is that Glass’ failure doesn’t ultimately stem from people perceiving it as uncool; it’s that Glass isn’t perceived as all that useful. Google had hoped Glass’ early users would help find the functions for its form; now Fadell will have to push reset on that unsuccessful effort. Instead of asking users what Glass is for, Fadell must find a way to tell them.

And after that, maybe he can figure out the Segway.