Our New Reality is Augmented

Emerging technologies are creating portals for moving between the Physical and the Digital.

This article was first published in the January 2021 issue of Consumer Technology Association's i3 Magazine.

Famed sci-fi writer William Gibson didn’t invent the verb evert, which means to turn inside out. But he was the first to apply it to the blurring of lines between the physical and digital realms. The plot of his 2007 thriller Spook Country involves the then-novel concept of locative media, digital content delivered to a device depending on the user’s location. A character in the story notes that with such tech, cyberspace (a word Gibson did invent) “is everting.”

In tech terms 2007 was several lifetimes ago (that’s the year the iPhone was introduced) but Gibson and some others could see where we were headed. Today, cyberspace remains mostly distinct from the “real world,” but that’s changing fast. We’re nearing a point at which the real world will serve as a backup, so to speak, for exquisitely detailed digital realms in which we can plan, design and test virtually anything.

I’ve been thinking a lot lately about two such tools, XR and digital twinning. XR (extended reality) is an umbrella term for virtual reality (VR) and augmented reality (AR). While VR is immersive, AR layers images over the real world. A digital twin is a virtual mock-up of a physical object or space and a platform for passing data between the two. These technologies are different, but both evert the physical and digital worlds in exciting ways. 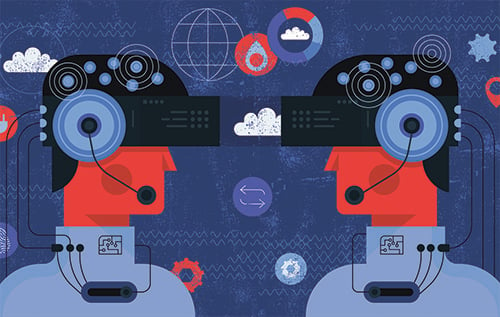 Image courtesy of i3 Magazine

Many of us in the tech Industry know what it’s like to attend CES as an exhibitor setting up displays and making sure every item is in the right place.

Virtual exhibits need to be set up as well. In the fall of 2020, I attended the Wall Street Journal Tech Live Virtual Conference, which featured a virtual panel presentation by Anand Argarawala, co-founder of Spatial, a virtual-reality collaboration platform that turns the space around you into a collaborative augmented workplace. I clicked a link I’d been given and found myself in a “room” that was being prepared for the event. I saw Anand’s avatar turn around suddenly and ask, “Who’s here?” Luckily, he knew who I was, because I’ve been a beta tester for Spatial since March. We laughed, and it occurred to me later that I might be the first person to stumble into a virtual presentation set-up.

Spatial isn’t quite the Star Trek Holodeck yet, but it’s definitely more immersive than a 2D video chat. It’s can be accessed on various headsets, including Microsoft Hololens, Oculus Quest and Magic Leap. These let you experience “Spatial Sound,” which is directional in the virtual space. If an avatar “standing” next to you or behind you speaks, you hear their voice from the appropriate direction. And I found myself — my physical self — turning to look at the speaker. 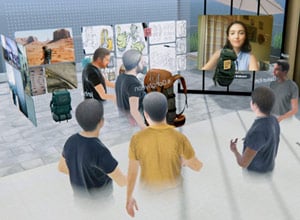 Within 10-15 minutes, you get the sense of being in a room with others. Ironically, this holographic meeting helped bring back more real aspects of human interaction after months of Zoom and Microsoft Teams meetings. This could be a new way to relieve “Zoom fatigue.”

People without headsets can still join a Spatial meeting through the web app via a laptop camera, appearing on a screen displayed on one of the virtual walls. The walls can also display notes, images, interactive PowerPoint presentations, playable videos, and just about anything in a real conference room.

The attendees can also interact with 3D models, sketch over them, scale and rotate in the space. These features are especially intriguing to me. In the near future, perhaps people will meet in the real world and in Spatial simultaneously. They could move between the two spaces as needed, with a three-dimensional prototype on the conference room table and a digital mockup of that prototype in the Spatial room, where their avatars can interact in ways their physical bodies can’t.

At present, the main limitation is the cost and bulk of VR headsets. But progress is inevitable, given the seemingly limitless applications.

“For all the billions of dollars poured into the field, nothing has yet emerged as the iPhone of VR: the product that combines compelling technology with an intuitive, desirable form,” noted Wired.com earlier this year. “And while augmented and mixed reality are still a few years behind VR, it stands to reason that these related technologies won't remain distinct for long, instead merging into a single device that can deliver immersive, shut-out-the-world VR experiences—and then become transparent to let you interact with the world again.”

The concept of a digital twin — a virtual mock-up of a physical object or space on a platform that passes data between the two — has been around since the early 2000s. But only recently has technology risen to the challenge of delivering on the promise.

Today digital twinning is being used in fields as varied as medicine (to synchronize all sources of patient data to create a complete picture of a patient’s needs), regional planning (to easily share data in a standardized form, collaborate on solutions and better plan maintenance and new construction) and manufacturing (allowing businesses to spot potential problems before they happen). This is part of the promise of Industry 4.0, the influence of which will likely be felt in every industry.

Thirteen percent of organizations implementing Internet of Things (IoT) projects already use digital twins, while 62% are either in the process of establishing digital twin use or plan to do so, according to Gartner. Deloitte estimates that the digital twin industry will grow from $3.8 billion in 2019 to $35.8 billion in 2025. Early adopters included manufacturers (a Czech car maker used digital twinning to determine how to integrate a new robot station into its assembly line, in three weeks less than conventional methods); the oil and gas industry (for predictive maintenance and training); and the U.S. Navy (for keeping track of ship parts).

The government of Singapore funded the creation of a digital twin of the entire city, and a group called Infrastructure New Zealand is calling for a similar project for that island nation. The European Union is planning a digital twin of the entire Earth “that would simulate the atmosphere, ocean, ice, and land with unrivaled precision, providing forecasts of floods, droughts, and fires from days to years in advance.”

But use in the product development process “dominated the digital twin market in 2019, owing to the rapid integrating of digital clones to track the performance of every individual component of a product,” reports ResearchAndMarkets.com. Using digital twins can “bring down the mean time to repair (MTTR) and mean time between failure (MTBF). All this ultimately decreases the operating costs and increases the operational efficiency.”

But efficiency is just the beginning.

“When it comes to solving big human and social problems, the process of innovation becomes that much tougher,” notes the MIT Sloan Management Review. “It may be unethical to run experimental tests on somebody’s heart, for example, and you can’t stop traffic in a city’s rush hour to experiment with new routing systems. Or can you?”

You can with a digital twin.

“Just as humans collaborate to innovate, so, too will digital twins,” according to the MIT Sloan Management Review. Much of the value associated with digital twins arises from a digital thread, a connecting infrastructure that allows digital twins to share information with one another and connect traditionally siloed functional perspectives.”

The pandemic is expected to accelerate the adoption of digital twinning in construction, as architects “design and build for maximum social distancing under various human traffic scenarios and to strategically incorporate and test other building elements like occupant temperature, contact-free interfaces and robotics,” per ConstructionDive.com.

So, if we’re to see the silver lining out of the pandemic, we now have a captive audience at home (as consumers and professionals) and XR can be a solution while the real world is getting back to normal. The last eight months have projected us at least eight months into the future of adoptions and expectations. XR is no longer just for gaming, it can actually bring us together in new ways and provide tools for us to predict and build our collective futures.