We highly recommend the recent Atlantic article “Google X and the Science of Radical Creativity,” which provides a rare glimpse inside the company’s secretive “moonshot factory.” But don’t read it just to marvel wistfully at what it might be like to enjoy almost limitless resources. There are lessons for all companies in how and why Google parent Alphabet launched a division with the mission to “dream up far-out answers to crucial problems” that have nothing to do with its core business.

One of the most important points the article makes is difference between two words we often conflate, invention and innovation.

Invention is typically the work of scientists and researchers in laboratories, like the transistor, developed at Bell Laboratories in the 1940s. Innovation is an invention put to commercial use, like the transistor radio, sold by Texas Instruments in the 1950s. Seldom do the two activities occur successfully under the same roof. They tend to thrive in opposite conditions; while competition and consumer choice encourage innovation, invention has historically prospered in labs that are insulated from the pressure to generate profit…

[Google X] is investing in both invention and innovation. Its founders hope to demystify and routinize the entire process of making a technological breakthrough—to nurture each moonshot, from question to idea to discovery to product—and, in so doing, to write an operator’s manual for radical creativity.”

There’s no indication in the article whether Alphabet might someday share that “operator’s manual,” but no one needs to wait.

Google X casts a wide net, but only a small fraction of ideas makes it through the vetting process. Winnowing the list of prospective pursuits is the responsibility of the Rapid Evaluation team. “You might say it’s Rapid Eval’s job to apply a kind of future-perfect analysis to every potential project: If this idea succeeds, what will have been the challenges? If it fails, what will have been the reasons?”

“The best evaluators,” the article notes, citing research, “are like player-coaches—they create, then manage, and then return to creating.” And that’s the case at Google X; the Rapid Eval team is made up of designers, engineers and others who spend most of their time working on projects already in the pipeline. There is no separate decision-maker caste.

Does your organization empower associates to make or at least weigh in on decisions? The people in the trenches typically have the most useful information, about what the company does well and what it could do better. If they aren’t in the room when plans are made—and confident that when they speak, they’ll be heard—then you could be missing out on priceless intel that middle managers may not even know they don’t know. Building this kind of culture begins with hiring but requires careful, ongoing maintenance from leadership.

You can’t learn from failure by blaming

Google Glass was a flop—as a consumer product. As the Google X article notes, however, “Glass has reemerged as a tool for factory workers, the same group that showed the most enthusiasm for the initial design.”

At many companies, a failure of even a fraction of Glass’s proportions would have resulted in firings and other rash decisions. Google stepped back and studied what went wrong. 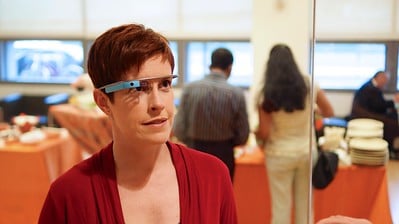 But Teller and others also saw Glass’s failure as representative of a larger structural flaw within X. It had no systemic way of turning science projects into businesses, or at least it hadn’t put enough thought into that part of the process. So X created a new stage, called Foundry, to serve as a kind of incubator for scientific breakthroughs as its team develops a business model. The division is led by Obi Felten, a Google veteran whose title says it all: head of getting moonshots ready for contact with the real world.

Everyone wants to launch disruptive products. But too many fail to plan for the internal disruptions that are often needed to bring a product to market and support it for long-term success.

Match people to projects and projects to people

The article describes a project code-named Malta, which involves storing energy derived from wind turbines and solar panels in molten salt. The head of the project explains that when Malta moved to the Foundry stage, he determined the point at which he should be “fired.”

“I’m a display engineer who knows about hetero-doped polysilicon diodes, not a mechanical engineer with a background in power plants.” Apte won’t leave X, though. Instead he will be converted into a member of the Rapid Eval team, where X will store his creative energies until they are deployed to another project.

Thinking about the creation of Foundry, it occurred to me that X is less a moonshot factory than a moonshot studio. Like MGM in the 1940s, it employs a wide array of talent, generates a bunch of ideas, kills the weak ones, nurtures the survivors for years, and brings the most-promising products to audiences—and then keeps as much of the talent around as possible for the next feature.

It’s important to find the balance between role stability, which people need to in order to focus, and change, which combats complacency and leads to valuable cross-pollination of ideas and perspectives. There is no formula for this, it comes from monitoring progress carefully and listening to people from all levels and phases of projects. We can’t stress enough how vital it is to be attuned to people throughout your organization.

Learn what your organization can gain from Nottingham Spirk's due diligence process.