This is a commentary piece based on an article found on theverge.com and written by Chris Ziegler. Chris is a longtime TiVo fan but now laments the once-revolutionary device’s slow slide into also-ran status:

But then something happened. Well, actually, nothing happened. TiVo innovated at a pace unbefitting its role as a disruptor; it got weirdly complacent for a company that was facing constant threat from the cable and satellite providers who were creeping on its only game. Behind the scenes, TiVo was effectively becoming a patent-holding firm, treating its shrinking customer base like a sideshow. It kept selling hardware, even as it put that hardware on the back burner internally.

“If any other tech company on the planet moved at TiVo’s pace,” the writer adds, “releasing just-good-enough hardware once every few years — they’d be dead.” 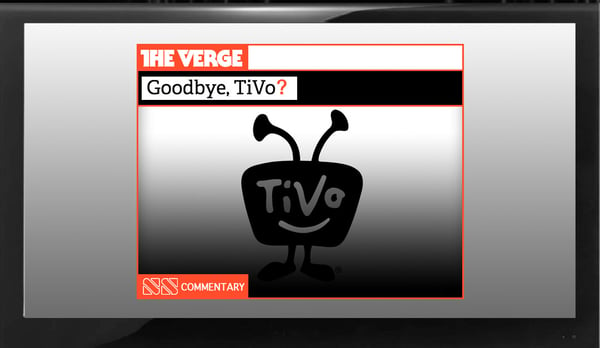 Fortune magazine recently noted that TiVo has been the subject of many acquisition rumors over the years, including as recently as 2012, when the stock price was “in the $8 range.” But none of the supposed buyers — which included Apple, Google and Microsoft — ever pulled the trigger. Randy Komisar, a former board member, attributes this to the treacherous terrain the company had to navigate:

First, multi-service operators putting their own DVRs in consumers’ living rooms caused TiVo’s user base to shrink. Secondly, because TiVo was reliant on cable operators to support their boxes, the company was hamstrung in attracting new users through marketing and advertising. If they showed their product to be superior, or explained how it was a cheaper alternative to bundled DVRs, they risked offending their cable company partners. Thirdly, the cable company DVRs violated TiVo’s patents, the company alleged, presenting a series of do-or-die cases it would have to repeatedly win in court—and it did that later rather than sooner, Komisar says. “Fundamentally, we should have sued earlier on the intellectual property,” he concedes. These issues also scared off potential buyers.

The legal battles seem to have both drained and sustained TiVo.

“Last June,” the Fortune article explains, “TiVo landed on the fairer side of a $490 million settlement between itself and Cisco, Motorola, and Time Warner Cable, effectively ending years of litigation and leaving the company, in all, $1.6 billion richer after going seven-for-seven in defense of its ‘time warp’ patent. Though the company finished with stockpiles of its competitors’ cash, its retail consumer base had been ravaged in the interim, with large multi-service [cable and satellite] operators providing the majority of in-home DVRs across the U.S.” Legal victories can’t ensure continued relevance in the market. Over the past year TiVo has competed on two fronts. The first is market share: TiVo has secured new deals with multi-service operators (MSOs), boosting its subscription base above 5 million for the first time.

John Nottingham explains, "Be careful what you wish for. If you decide that you need to innovate, you can't just stop after one meeting or after one product release. You have to be relentless and never stop innovating." The challenge is that TiVo had a great idea to disrupt Cable Television by inventing the DVR, but everyone else caught up to them. In light of this market evolution, TiVo just kept improving their original "Core" product. They really needed to create new disruptions in adjacent or breakthrough areas to remain on top.

We'll see what happens to them in the next 5 years. Every company can really decide their own destiny. So, it's up to TiVo. Hopefully, they have something brewing that will change the game." If not, then well...maybe they will be disrupted themselves.