Does brainstorming work? Only as part of a larger strategy. 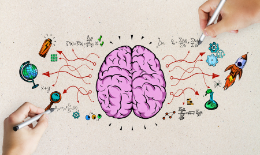 “Brainstorming” is one of the most misunderstood and misapplied concepts in business. The term remains in high circulation, but a quick Internet search will turn up numerous articles citing research showing that brainstorming doesn’t work. Our take? It depends on what you mean by it, and what you’re trying to achieve.

First, some background on brainstorming, which was developed by an advertising executive in the 1950s.

“Brainstorming is based on four rules,” writes Tomas Chamorro-Premuzic, professor of organizational psychology: “(a) generate as many ideas as possible; (b) prioritize unusual or original ideas; (c) combine and refine the ideas generated; and (d) abstain from criticism during the exercise. The process, which should be informal and unstructured, is based on two old psychological premises. First, that the mere presence of others can have motivating effects on an individual’s performance. Second, that quantity (eventually) leads to quality.” At Nottingham Spirk, we’ve always felt that the fourth rule is the most important. In order for brainstorming to work, you need to establish a core principle at the beginning of the meeting, “There are No Bad Ideas.” If you don’t layout this rule, you might get a lot of awkward silences.

But, he continues, “there is very little evidence for the idea that brainstorming produces more or better ideas than the same number of individuals would produce working independently.”

The problem, however, isn’t collaboration itself, but how and when it’s used. Context is everything.

Brainstorming sessions can be productive, if everyone understands they are neither the start nor the end of the work. They are not a hack, to be used only in times of need.

“If you start a meeting and you say, ‘Okay, we’re gonna come up with really good ideas,’ that can be a really bad way to start,” says Joel Chan, who studies creative processes. “Innovation can be hampered if everyone tries to fit the mold of the ‘eureka breakthrough’ and thereby miss out on really good ideas that can be achieved through less ‘romantic’ means.”

Chan and a partner analyzed transcripts of brainstorming sessions between engineers and found that progress from idea A to idea B to breakthrough C was incremental, and was facilitated by the use of analogies. Curiously, analogies that were far removed from the problem at hand — for example, invoking a garage door to make a point about the design of a printer — did not lead to breakthroughs more often than “near analogies.” But they “increased the team’s concept generation rate.”

This illustrates the importance of smart hiring. Innovation requires ongoing collaboration among smart, dedicated people with different skills and perspectives who are equally adept at listening and challenging. Skills are important, of course, but they are not more important than the ability to work as part of a team. (Dan Coyle, author of The Culture Code: The Secrets of Highly Successful Groups, advises against hiring what he calls “brilliant jerks.”) Trust is crucial. You need teams that can sharpen and build on each other’s contributions, without jockeying to take credit or worrying about blame.

And team members need time apart, to consider what was discussed in the meeting on their own time.

“At any given moment,” writes Jonah Lehrer in Imagine: How Creativity Works, “the brain is automatically forming new associations, continually connecting an everyday x to an unexpected y.” But as he goes on to explain, these associations adhere to their own schedules, often popping up when we’re doing something totally unrelated (like showering). Developing breakthrough solutions requires stimulation and quiet, collaboration and separation.

To learn more about Nottingham Spirk’s innovation process, contact us.