Millennials Are Changing Corporate Structure — for the Better

Millennials are prompting more companies to reconsider the traditional corporate hierarchy, according to Entrepreneur.com:

“With millennials entering the workforce, there is a resounding call for a structural shakeup. These young professionals have a lot to say and they want to have their voices heard. Successful companies are noticing this. ...Working as a team and allowing leadership behaviors to naturally develop gives employees the chance to be heard, no matter their level of seniority.”

In a white paper titled Millennials at Work, PricewaterhouseCoopers states it even more bluntly: “Millennials tend to be uncomfortable with rigid corporate structures and turned off by information silos. They expect rapid progression, a varied and interesting career and constant feedback. In other words, millennials want a management style and corporate culture that is markedly different from anything that has gone before — one that meets their needs.” This is going to shake up a lot of companies. Change to longstanding beliefs and practices happens slowly, then very quickly, as the organizations that refused or failed to adapt find out where the tipping point is the hard way. But we’re heartened by this overdue change, and any company that values innovation should too. 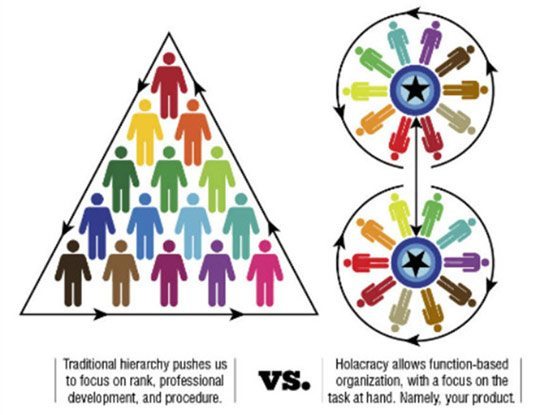 Image via businessoffashion.com - “Inside the Zappos Holocracy”

Nottingham Spirk has operated with a flat management structure or “Holocracy” for more than 43 years. We have never found the top-down model or compartmentalization of responsibilities to be conducive to the creative process. There are no departments here, in the typical sense, and therefore no turfs to protect. Colleagues are collaborators, not competitors and certainly not future minions. Our partner-clients tend to adhere more to the traditional pyramid-shaped hierarchy, and we understand why. Pyramids are stable. But we believe that innovation calls for a little bit of chaos — starting with a commitment to a different kind of leadership, one in which only the merits of an idea matter, not who proposed it.

When we hire, one of the attributes we look for is a willingness to work in a team. But teamwork isn’t just deferring to consensus, it’s also speaking up when you have something to contribute, regardless of age or expertise. We expect designers to challenge engineers and vice versa. And we expect our newest associates to chime in with a “Yes, but …” when it’s warranted. Professionalism is also expected, of course, but we want friction — that’s where sparks come from. The best climate for innovation is one in which immediate challenges are allowed to mingle and collide with the unrelated and the unexpected.

In business, like in the arts, breakthroughs are rarely wholly new inventions; more often they are new combinations of existing and seemingly unrelated ideas. Star Wars disrupted the entire movie industry like nothing before or since, but George Lucas’s inspirations — including feudal societies, samurai movies and footage of WWII dogfights — were widely varied and accessible to everyone. According to the results of a recent KPMG survey, “While spurring innovation is among the top challenges for CEOs, just 17 percent of companies have developed and implemented a formal, company-wide process for innovation across all units.” And even they may not be succeeding, because establishing a process is the second step. The first is fostering a culture that prizes ideas and initiative and audacity. If you don’t know how to do that, there are millions of eager young people out there who will show you, if you’re willing to listen.