MIT recently published a previously unknown essay on creativity written by Isaac Asimov in 1959. The Science Fiction icon had been asked to consult on a project involving a ballistic missile defense system. Asimov eventually left the project, but not before sharing his thoughts on the makeup of a team that could conceive of new approaches well beyond then-current technology.

Titled simply “On Creativity,” the essay examines the qualities most conducive to collaboration among highly skilled and educated people. Some highlights:

The entire essay is worth a read. We like these quotes because they best illustrate Asimov’s central point, that building a team that can innovate is challenging. A knack for creativity does not necessarily imply a willingness to collaborate; and collaboration by itself does not produce dramatic results if the situation isn’t conducive to risk-taking. Success lies in finding a potent mix of personalities and environment — and in accepting that “success” itself can be a moving target.

We maintain close ties to the Cleveland Institute of Art and Case Western Reserve University, and over the decades we’ve relied heavily on our internship program for hiring. We’ve had time to evaluate them, and they us. But we do hire from the corporate sector as well, when we meet someone who seems flexible and confident enough to fit in with our Vertical Innovation process.

When hiring for creativity, we may conduct interviews a little differently than most companies. We don’t spend a lot of time talking about the applicant’s resume. We’re more interested in what drives them. We listen for indications that autonomy, mastery, and purpose are guiding forces. That’s why we ask about hobbies. People with hobbies that combine the hands and the mind — painting, playing an instrument, restoring cars — often have the balance of vision and persistence that we value. Hobbies can provide a glimpse into whether the person has the qualities that author Malcolm Gladwell identifies as common among "disruptors”: self-confidence, imagination and dogged determination.

But hobbies are usually solo endeavors, and we don’t hire soloists. At Nottingham Spirk, “teamwork” and “openness” are not platitudes, but articles of faith. So we also listen for excessive use of “I”. We want people who derive satisfaction from solving problems and completing projects, not from getting the credit. In his book Give and Take: A Revolutionary Approach to Success, Adam Grant describes “Takers” — the most self-centered of three basic workplace types  — as people who “self-promote and make sure they get plenty of credit for their efforts.” People like this may excel at other companies, but not with us.

After acceptance, the evaluation process continues. At this point the key attribute we’re looking for — or rather, listening for — is a voice. Admittedly it takes courage bordering on audacity to speak up in meetings when surrounded by staff members with years, perhaps decades of experience. But audacity is precisely what we need. Without risk, there is no innovation.

But without support, there is no risk. Rookies who are encouraged to speak up will sometimes suggest ideas that have been tried and rejected. And experienced people who chase hunches will sometimes run into dead ends. In neither case do we chastise. At Nottingham Spirk there are no career implications for honest mistakes. Not because we don’t care about results, but because we understand that achieving the best results means respecting the unpredictable, nonlinear nature of the creative process. 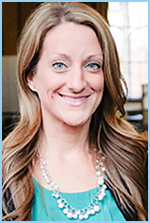 Amanda  joined our Insights team in 2014, after several years of service as a market researcher for large for-profit and non-profit corporations. At such organizations, she explains, “You are a specialist. You work on your part of a project, then you hand it off to the next specialist.” And even though this was high-level work, it’s not unlike an assembly line. “You can get lost in the org chart, and it’s hard to feel like you’re making an impact.”

At Nottingham Spirk, she says, the expectations are quite different. “The biggest difference is the breadth of what I touch. Here you’re engaged from the very beginning and through completion of the project. That’s something I was really drawn to, the ability to have more ownership of the process.”

We hired Amanda because we saw that she would thrive in this environment. We trust her to give her best, and she trusts us that we mean it when we say that we believe in failing small, over and over, in order to succeed big.