Boundary Crossing with The Marvel Method

John Nottingham has a saying: “Innovation is not something we do on Thursday.” His point is that creating is not an event, but a process that you engage in every day. Collaboration is vital to that process, but again, it’s not something that happens only in meetings. And it won’t happen at all if the boundaries between roles and departments are rigid. The “horizontal handoff,” as we call it — in which projects pass from department to department with a “we’ll take it from here” attitude — is not the kind of true collaboration that fosters meaningful innovation.

Vulture.com's profile of Marvel Comics legend Stan Lee provides an intriguing glimpse into the influential company’s creative process. We were particularly struck by a passage on the so-called “Marvel Method” of the 1960s. The Marvel Method was Lee’s break from the tradition of producing comic books in something like an assembly line, with writers cranking out scripts that included detailed instructions for the artists.

To save time while writing a dozen or more comics at once, Lee had recently developed a thrifty alternative to writing out full scripts. He’d merely come up with a rough plot — “as much as I can write in longhand on the side of one sheet of paper,” as he put it in a 1968 interview — talk that over with the artist, then make the artist go off and create the entire story from scratch. Every emotional beat, character interaction, and action sequence was now the responsibility of the guys drawing them, who until then had been accustomed to just drawing whatever a script told them to draw. Now it was the artists who built the narrative architecture, and the writers who did something more like buffing up: Once Lee got the artwork back, he’d interpret what he saw and cook up dialogue bubbles, narration, and sound effects. 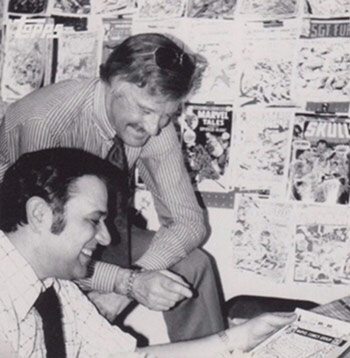 Stan Lee and John Romita Sr. (writer, artist, editor) planning out a book with plenty of art decorating the walls.

The Marvel Method … was an artistically fertile game-changer. The tyranny of full scripts was over, and artists were free to come up with graphic ideas that worked for them. “I realized that comics from a script was absolutely paralyzing and limiting,” says John Romita Sr., an artist who worked extensively with Lee in the ’60s and has remained a close friend ever since. “When you had the option of deciding how many panels you’d use, where to show everything, how you pace each page out, it’s the best thing in the world. Comics becomes a visual medium!”

The characters and stories that grew out of these writer-artist partnerships revitalized the comics industry and influence pop culture to this day.

When you assign people to narrowly defined roles, or allow departments to act like sovereign nations, you stifle creativity. There are all sorts of reasons why people might never speak up and offer ideas or try things not spelled out on their job descriptions. The most likely: they’ve never been encouraged to. In our experience, most executives genuinely believe that the merits of ideas should matter more than who proposed them. But it’s not enough to say this; your culture has to reinforce it.

Until it does, you’ll never know your organization’s full potential.