Innovation is an "Infinite Game"

This article first appeared in Smart Business, May 2019. Reprinted with permission.

Swimmers Michael Phelps and Chad le Clos appeared in one of the most memorable images from the 2016 Olympics. The photo (above) is from the 200 meter butterfly race, and it shows le Clos glancing at Phelps as the latter passes him en route to winning his 20th gold medal. Many described the glance as the moment le Clos lost the race. But if you watch the video closely, you’ll notice that le Clos actually checked on Phelps’ progress at least six times, starting in the second lap.

Le Clos started the race strong, slightly ahead of Phelps, but finished fourth. He may have been more focused on his rival than on his own performance.

Businesses often make this mistake as well, worrying more about competitors than about themselves. Smart companies understand that business competition is not a sprint, or even a marathon; it’s what Simon Sinek calls an “infinite game,” in which the players and rules can change without warning, and the objective is to keep playing as long as possible. 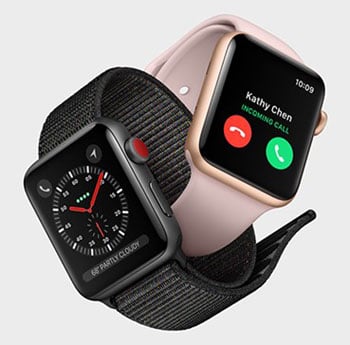 Apple Watch - a wearable with a cellular connection

Apple is famously forward-looking, competing primarily with itself. The iPhone cannibalized sales of the then-successful iPod line, and now the Apple Watch is encroaching on the iPhone’s functions. As CEO Tim Cook said on 60 Minutes, “When we launch a product, we’re already working on the next one. And possibly even the next, next one. And so yes, we always see things we can do.”

Granted, Apple is a $1 trillion company and the view is different from that height. But the principle applies to everyone.

In an episode of The Knowledge Project podcast, Robert Greene, author of The 48 Laws of Power, talks about Law 29, “Plan all the way to the end.” (End, in this context, means a specific goal.)

"Plan all the way to the end is a way to force you to think further ahead,” he explains. “If you keep reacting to what your opponent is giving you in this rivalry to get market share, your mind never rises high enough above the battlefield to come up with a reasonable plan that actually is more strategic and involves things that aren’t just reactions. Thinking of the ending forces you to get out of the moment and think longer-term."

I’d take this a step further and suggest adjusting your concept of the “end.” A product release is not an ending, but rather the beginning of a new stage. In our experience, getting to market quickly is better than trying to perfect the product. Launch a good version, then use the ideas left on the cutting-room floor and consumer feedback to start working on a better version. Keep gathering market data, of course, but don’t let evaluation stall you. Make sure you’re always taking two steps forward and only one step back.

Motion is progress, and in the end it’s the only thing you can control.