Case Western Reserve University is already one of the top-20 schools in the nation for research funding. But the expanding thinkbox facility will make CWRU unique not just in academia but the growing national Maker Movement and Nottingham Spirk is pleased to be getting in on the ground floor.

Designed to support a wide range of innovators, thinkbox houses high-end manufacturing and prototyping equipment, including 3D scanners and printers, a printed circuit-board router, a laser cutter and a large-format printer. Currently housed in the basement of the Glennan Building, thinkbox will relocate later this year to a 50,000-square-foot renovated warehouse, also on campus. After raising $25 million of the estimated $30 million bill, CWRU held a virtual groundbreaking for the new center in October 2014. Phase I — the first four of seven floors — should be completed in August 2015. (For details of the seven floors, see pages 16-17 of the Fall 2014 Alumnus magazine)

The completed 50,000-square-foot facility will be one of the largest university-based innovation centers in the world, and possibly the only one open to all students, regardless of major, and to the public. As Freshwater Cleveland notes , “It’s a venture that has the potential to play a major role in spurring innovation in the region.” The project has even attracted the attention of the White House’s Office of Science and Technology Policy.

“No one’s ever built anything like this,” says thinkbox manager Ian Charnas. And the value far exceeds the easy access to $5 million worth of state-of-the-art machinery. “The thing that’s most exciting,” he adds, “is the ecosystem. People working here could run into someone from Nottingham Spirk, the Cleveland Clinic, City Council.” 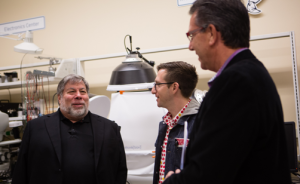 “We don’t want to just watch new product ideas come out of thinkbox, we want to work with students and faculty to help them reach the marketplace more quickly,” says John Spirk. Nottingham Spirk VP, Vikki Nowak adds, “Through our trademarked Vertical Innovation methodology, we will work with those promising technologies and mentor the students to find the markets that are most appropriate, and move quickly to commercialization.”