When Washington-based Sterifre Medical Inc.'s new disinfection system comes to market, Northeast Ohio will have played a significant role in getting it there. The company's AURA system got help at the design stage from Nottingham Spirk in Cleveland, and it will be produced at Sparton Corp.'s plant in Strongsville. Sterifre's AURA system will be an automated, point-of-care disinfection system.

Disinfecting near a patient is typically a manual process that relies on wipes or sprays, said Sterifre CEO Rick Shea. Those can destroy the sensitive electronics used in hospitals today. And other disinfectant methods use pressure, moisture or heat to disinfect, which also aren't compatible with electronics or soft plastics. 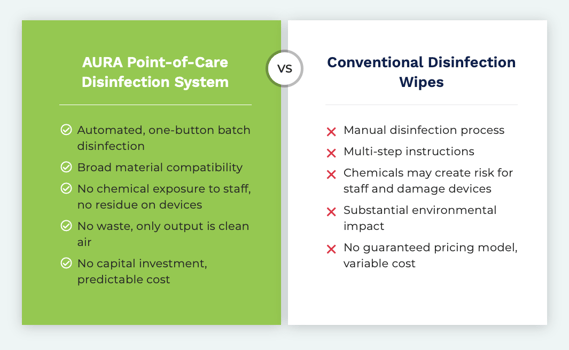 The AURA system will use hydrogen peroxide and cold plasma to disinfect items. The small unit is sized to fit small electronics like glucose monitors and handheld EKGs, Shea said. Users will be able to place these items in the system, press a button and come back in a short time to find them disinfected. That means it would both automate the disinfecting process and remove the caustic chemicals often used in manual methods.

Shea has long been a medical device entrepreneur, running companies like Spiration Inc. and Stericycle. When he met the Cornell University inventors behind the AURA system technology, he told them he wanted to be involved, as long as it could be on his terms. "I wasn't interested in just toying in something," he said. "If we had something this exciting, I wanted to make sure that it actually got to market." The inventors agreed, so Shea got to work putting a company together.

Nottingham Spirk came on board during the design phase, putting together a prototype and conducting market research. Nottingham Spirk has a background in consumer products, and their approach to market research was different than the one typically used in medical devices, Shea said. That meant Nottingham Spirk created prototypes that potential users — in this case, nurses — could actually touch and feel. They held focus groups to observe reactions to the product from behind two-way glass.

Traditionally, for medical devices, companies build a working product, but they figure out the user friendliness components after the fact. Taking a more consumer-focused approach with Nottingham Spirk is letting Sterifre build in those features up front.

"I think it will pay huge dividends for us as we go forward," Shea said. 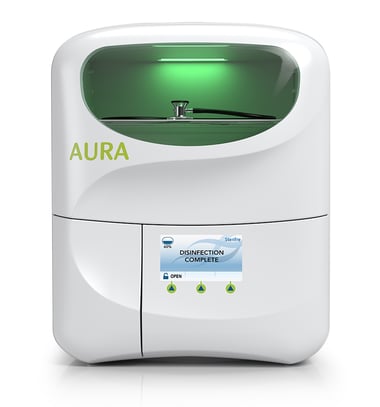 When Joachim Gfoeller, director of investments at Nottingham Spirk, saw the product idea, he knew it could make a big impact in the market. And that meant Nottingham Spirk was interested in getting involved beyond just the design work. Gfoeller said Nottingham Spirk also helped Sterifre raise capital. The prototype work is Nottingham Spirk's bread and butter, but getting so involved from a financial and operational standpoint is something the company takes on more rarely. In the case of Sterifre, Nottingham Spirk saw an accomplished leader and a product that solves a core problem, Gfoeller said.

Today, Nottingham Spirk is a shareholder in Sterifre, Shea said, and Gfoeller is on the board.

The AURA system now has moved over to Sparton for "productization," with the company doing the final validation of the design before starting real production, said Mark Stephenson, vice president for MDS Central and MDS Design Services for the Minnesota-based company.

Sparton's area of expertise is making complex, low-volume products, often as a contract manufacturer in the medical device or life sciences space. Strongsville is home to one of the company's design centers, as well as a factory, which made it a good location for this project. On June 26, Sparton announced plans to sell its contract manufacturing unit, Manufacturing & Design Services, which includes the Strongsville location, to a private equity firm. Stephenson said in an email that this would not affect the project with Sterifre.

Currently, Sterifre's AURA system is in the midst of an expedited review from the Environmental Protection Agency. The company had already begun the review process, but asked the agency to accelerate it when the COVID-19 pandemic began. Shea said he hopes to have registration by late summer, so production can begin in the fall.

Sterifre's system will initially be built and sold in the U.S., but that could expand in the future. And the technology behind the system could grow into other markets, Shea said. Stephenson said he thinks it's the "right time" for this product, and that Shea and his team did a lot of work toward creating a solution after identifying a gap in the market. That was true before the COVID-19 pandemic struck, but even more true in its midst.

Learn more about AURA in our case study.

About: Nottingham Spirk is an established leader in disruptive innovation, partnering with companies to create thriving new business innovations that propel economic growth. Since 1972, the privately owned company has served as a beacon of innovation for organizations pursuing uncharted territory to accelerate growth and improve life experiences. Learn more about Nottingham Spirk's expertise with medical products, as well as our innovation approach.