An op-ed about the value of high school shop classes got us thinking and reading more about education’s role in innovation. That’s how we came across this essay from March with the provocative title “Why America’s obsession with STEM [science, technology, engineering and math] education is dangerous.”

America’s last bipartisan cause is this: A liberal education is irrelevant, and technical training is the new path forward. It is the only way, we are told, to ensure that Americans survive in an age defined by technology and shaped by global competition. The stakes could not be higher.

This dismissal of broad-based learning, however, comes from a fundamental misreading of the facts — and puts America on a dangerously narrow path for the future. The United States has led the world in economic dynamism, innovation and entrepreneurship thanks to exactly the kind of teaching we are now told to defenestrate. A broad general education helps foster critical thinking and creativity. Exposure to a variety of fields produces synergy and cross fertilization. Yes, science and technology are crucial components of this education, but so are English and philosophy. When unveiling a new edition of the iPad, Steve Jobs explained that “it’s in Apple’s DNA that technology alone is not enough — that it’s technology married with liberal arts, married with the humanities, that yields us the result that makes our hearts sing.”

The term STEM is most often associated with elementary and high school. But the widespread urge to design curricula around employment trends began at the college level. The New York Times recently interviewed economist David W. Breneman, who wrote 25 years ago about the shift away from liberal arts degrees toward courses like engineering and business. “I don’t think one should get melodramatic about this,” Breneman said, “but we are drifting toward turning college into a trade school. And that is ultimately harmful. … We’ve got a whole way of thinking about college that focuses on the rate of return. And that dismisses the intangible benefits.”

We could not agree more, and we’re happy to learn that we are not alone in valuing multidisciplinary thinking. According to Forbes.com, tech companies are seeing the light as well:

What kind of boss hires a thwarted actress for a business-to-business software startup? Stewart Butterfield, Slack’s 42-year-old cofounder and CEO, whose estimated double-digit stake in the company could be worth $300 million or more. He’s the proud holder of an undergraduate degree in philosophy from Canada’s University of Victoria and a master’s degree from Cambridge in philosophy and the history of science.

“Studying philosophy taught me two things,” says Butterfield, sitting in his office in San Francisco’s South of Market district, a neighborhood almost entirely dedicated to the cult of coding. “I learned how to write really clearly. I learned how to follow an argument all the way down, which is invaluable in running meetings. And when I studied the history of science, I learned about the ways that everyone believes something is true–like the old notion of some kind of ether in the air propagating gravitational forces–until they realized that it wasn’t true.” 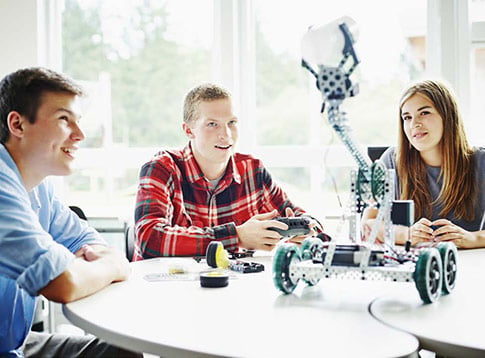 The article goes on to note that “software development keeps getting more automated,” and that there can be an enormous amount of “shuttle diplomacy” and other soft skills involved in guiding clients through complex projects (especially when different departments have dramatically different visions and concerns). And this:

Larry Quinlan, Deloitte’s chief information officer, argues in favor of “STEAM,” in which the A stands for the arts. “It’s not enough to be technologically brilliant,” Quinlan says. “We need senior people who understand business processes, too.”

What is business, at its most fundamental level, but the art of the possible?

To be very clear, we are not advocating liberal arts degrees for all undergraduates. But we have always believed that organizations benefit from intellectual diversity, and that individuals benefit from exposure to a wide range of information and experiences. Emerging science shows that creativity is far more complex than previous thought, and that to be successful, project teams need more than just expertise  in the task at hand. Dynamic companies are made up of nimble minds. And when fiction has been shown to improve cognitive function, it’s hard to defend hyper-specialization.