For true disruption, be “Gritty” in your approach

You don’t have to be a hockey fan to have heard of Gritty. Released into the wild in September 2018, the furry, orange, manic new mascot for the Philadelphia Flyers was a literal overnight online sensation. He’s appeared on Good Morning America and The Tonight Show and been mentioned a few times on Saturday Night Live’s “Weekend Update” and HBO’s Last Week Tonight with John Oliver. ESPN even found that all the attention seems to annoy at least some of the NHL’s other mascots.

“Mascots are inherently dumb,” according to SBNation, and professional sports is full of them, even in the minor leagues. How did this one stand out – to the tune of an estimated $162 million in free exposure in its first month? A surprising number of news outlets have tried to answer that question, and after reading several such origin stories, we’ve gleaned some insights that could be helpful to any organization that’s innovating, launching, and marketing a new product.

Unless otherwise noted, the excerpts assembled here came from these articles in The Washington Post, Philadelphia Magazine, USA Today, VOX, AdWeek, and The Ringer. 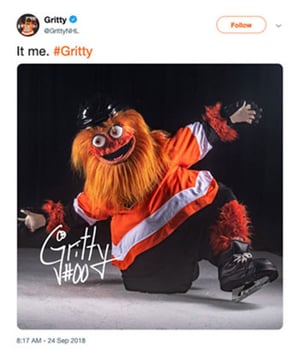 The Ringer, quoting mascot consultant Dave Raymond: “In the early going, I tell them, ‘Don’t focus on any visual image. If you have an idea, that’s fine, we don’t want to discount your idea, but the most important thing is to create a story for your character,’” Raymond says. “And the roots of that story should be mined from the history of the organization, the most successful people and events in your organization’s history, and urban myths and legends. Then do the same thing with your community. … You’re only going to get people to care about anything if you demonstrate that you care, and you demonstrate that you understand the people you’re reaching out to.”

AdWeek: During one session, team president Paul Holmgren started tossing names around that described the team. Jokingly, he suggested Gritty, and Tilger immediately loved it. “That’s the word!” The Flyers try to brand their organization around that word, describing Philadelphia as a gritty city. It stood out so much that few other names were even seriously considered.

“We made a conscious decision as an organization that we were going to lean in,” says COO Shawn Tilger. Here, “leaning in” meant going for broke with a googly-eyed freak.

The Ringer: Philadelphia sports fans have a reputation for being quick to anger, slow to forgive, and fiercely defensive about whatever corner of the sports or cultural universe they’ve staked out, no matter how incomprehensible that position appears to outsiders. That reputation is facile and reductive, but also largely accurate.

Washington Post: He is irreverent and wild. A little rough around the edges. Just super on-brand, a true [expletive] Philadelphian.

“To me, Gritty is this monstrous creature who was born in really troubled times, makes its way onto the national stage by being nothing but its unapologetic self,” said Philadelphia city councilwoman Helen Gym, who introduced a municipal resolution to welcome Gritty that referenced a number of (very accurate) descriptors, including “orange hellion” and “fuzzy eldritch horror.” “There is nothing more Philadelphia than being unapologetically yourself.”

Collaborate with people who will push you

Washington Post: The team consulted with David Raymond, original best friend of the Philadelphia Phanatic and a king in this mascot world.

Vox: He was designed by the freelance graphic designer Brian Allen … The Flyers contacted Allen after seeing the “edgier” versions of the mascots he had designed for the 2017 Georgia-Auburn college football game as part of a Chick-fil-A ad campaign. All they told him, he says, was that they were hoping for a mascot you’d want to high-five but maybe not hug.

Philadelphia Magazine: Eventually, there were two finalists: a kinder, gentler beast, which became thought of as the “safe” option, and a proto-Gritty monster drawn by Brian Allen of Flyland Designs in Bellefonte, which pushed the envelope.

“We made a conscious decision as an organization that we were going to lean in,” says COO Shawn Tilger. Here, “leaning in” meant going for broke with a googly-eyed freak.

Thrillist: And those hideous, amazing googly eyes? Not in the original design, but when Character Translations, the company that built the Gritty costume in just two months, offered the detail (along with the ability to blow smoke out of his ears), the team could hardly say no.

Keep calm and carry on

USA Today: Gritty got off to a slow start when the Flyers unveiled him with a stock photo of a menacing mascot that made him look like more like the cold-blooded Pennywise than a lovable monster that a kid would want to hug.

[Editor’s note: “Nightmare fuel” was a common first impression, even among Philadelphians.]

Vox: It’s easy to forget now, but the initial response to Gritty was one of weird terror. Somehow, the Philadelphia Flyers had conjured a sinister children’s television character straight out of a creepypasta, turned it into their mascot, and then set it loose on the internet. Gritty’s shtick isn’t that he’s lovable and huggable. It’s that he’s super confrontational and just a little scary.

Philadelphia Magazine: From the moment of the mascot’s first tweet — “It me. #Gritty” — at 11:17 a.m. on Monday, September 24, 2018, Twitter did what Twitter does: It crucified the creature. And it didn’t stop there: It pilloried the marketing team, the Flyers, and Philadelphia for good measure.

Of course they saw it coming. They’re marketers, after all, and social media natives besides. But more importantly, they were prepared because from the moment they embarked on this project, they had been coached to be [by Raymond]. And what happened in that room — what the Gritty Brain Trust did in that hour — would change everything.

It’s one thing for Philadelphians to give the Flyers mascot a raft of s---. It’s quite another for anyone else to. And that’s how a supposed marketing fail pivoted into the most successful mascot launch basically ever — and a full-fledged international obsession.

Within hours, the mascot was on Good Morning America. A few days later, it was clowning with Fallon. SNL and John Oliver and Conan all did their takes. Gritty was trending for days, producing some 4.8 billion views across TV and the web, worth an estimated $162 million of exposure in its first month. 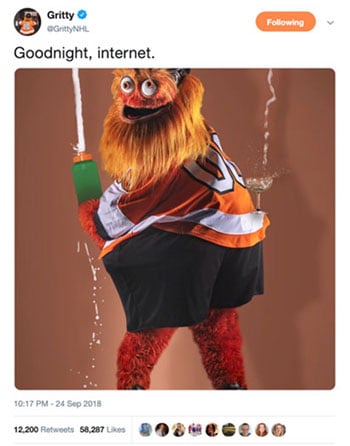 Philadelphia Magazine: Gritty’s social media squad is on point. Aiding the performer himself — whose identity is a closely guarded secret — is a three-headed hive mind of Christine Mina, Lauren Robins, and marketing/communications coordinator Lauren Capone. The soft-spoken Robins is, per her colleagues, the impish creative genius of the group; for instance, she masterminded the internet-crashing “Kim Kardashian” tweet at the conclusion of the mascot’s first day.

These three, with the performer, have gradually honed the mascot’s online voice, converting the confused and sniping back at the haters with one well-timed, well-toned tweet after another.

Vox: A lot of Gritty’s tweets are improvised on the fly. “What you’re seeing on Gritty’s account isn’t vetted up 15 flights of stairs. It’s what makes the most sense for Gritty in that moment,” Schwab says.

AdWeek: The team doesn’t plot out its moves days in advance, but rather work on a “five-hour-at-a-time window,” Schwab said.

“It’s almost like the [marketing team] sits around like the SNL writers,” Tilger said. “What’s a topic of interest and does it fit with Gritty and how do we play off of it?” The team uses Slack to kick around ideas and workshop them. Often, the team molds something mentioned as a joke into a viable idea.

Verify but trust. That’s a reversal of an old adage about peace negotiations, but it’s the best way to sum up the universal lessons of the Gritty launch. Start with identity, competencies and goals; assemble the best possible team, from within and without; let the team plan its work and work its plan. Nothing is guaranteed, but in our long experience, this is the best formula for successful disruption.