The CardioInsight EC VUE™ vest, the first electrocardiographic mapping (ECM) device, represents a major step forward in non-invasive heart imaging. The story behind its creation is almost as fascinating as the technology itself, in part because it represents the emergence of Cleveland, Ohio as a medical innovation center. 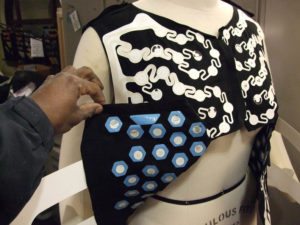 The EC VUE’s origin can be traced back to 1973, the year that Israeli-born Yoram Rudy arrived in Cleveland to join the Biomedical Engineering Ph.D. program at Case Western Reserve University. That’s where Rudy met Dr. Robert Plonsey, a pioneer in bioelectric phenomenae. Rudy would go on to teach at Case, and to work — for decades, as it would turn out — on a new approach to the century-old method of gathering information about the heart through bioelectric signals.

In the early 2000s, Rudy and the students who’d been helping him refine the technology took the first working ECM vest to Nottingham Spirk, which, like Case, is based in Cleveland’s University Circle district. It was a “Frankenstein prototype,” recalls John Nottingham, 15 pounds and bristling with wires. NS designed what came to be known as the EC VUE™, a lightweight, single-use vest with 252 sensors precisely spaced for optimal readings regardless of body type. Rudy’s students, Charu Ramanathan, Ph.D. and Ping Jia, Ph.D., launched CardioInsight, which was acquired last year by Medtronic in a $93 million deal.

All of this, from Rudy’s early research at Case to bringing the EC VUE™ to market, coincided with a tectonic shift in the Northeast Ohio economy. Like other cities in the so-called Rust Belt, Cleveland watched helplessly as its manufacturing base eroded during the 1980s and ’90s. At the time, few noticed that another sector, medical technology, was rising to take its place.

Qmed’s Medical Product Manufacturing News took notice in 2011 with an article titled “From Rust to Riches: Medical Device Manufacturing in Ohio’s Northeast.” Four years later, Cleveland cracked MPMN’s Top 10 U.S. Cities for Medtech Innovation. Since then, the same expansive and growing network of researchers, engineers and business experts that put Cleveland on the industry’s map is working to brand the region “the Medical Capital.”

In addition to Case (which also has a school of medicine), Northeast Ohio is home to:

As a result, Northeast Ohio is now home to more than 700 biotech, medical device and health IT companies, according to BioEnterprise, 390 of which were startups that attracted a combined $2 billion in local, national and international investment. National Institutes of Health (NIH) funding in Northeast Ohio added another $286 million in 2015 alone.

The temptation to draw comparisons with Silicon Valley is strong — and somewhat ironic, according to The Economist, which notes in an article about economic clusters: “Cleveland was the Silicon Valley of the second industrial revolution.” The writer goes on to explain that clusters perpetuate themselves by “attracting talent and money” and “investing in robust institutions like universities.” Fortunately, Cleveland still has many of the institutions founded during its early-20th-century glory days, like Case and the Clinic (not to mention the venerable museums and performing arts organizations that have been sources of local pride for generations).

And unlike the many small and mid-sized cities jockeying for the “next Silicon Valley” label, Cleveland isn’t chasing tech companies that could function almost anywhere (and won’t necessarily create many jobs). According to the Brookings Institute, in Cleveland, “more than three-quarters of deals are in clinical care services and medical devices.” That focus provides stability. Technology is just a tool, notes Richey Piiparinen, who leads the Center for Population Dynamics at the Levin College of Urban Affairs at Cleveland State University. What matters is how you use the tool.

Cleveland observes, treats, and innovates within the field of human health like few other regions worldwide. As a result, the field of medical technology, or medtech, is gaining some traction in the region. This is evidenced by IBM’s recent acquisition of the Cleveland Clinic-spinoff Explorys, which is a “big data” health analytics firm. The company, based in Cleveland’s University Circle, is expanding its Cleveland office, perfecting its processes of how the region’s elite health “know-how” can be further mined through technology — thus creating more knowledge, and then more health innovation.

“We have access to medical technologies at the very early stages, because they’re supported by the universities as well as the health systems,” he adds. “You have universities and health systems supporting innovation, and once they get a little above the trees, there’s additional support to get them to the next level.”

The Cleveland Cavaliers’ NBA championship and the successful hosting of the 2016 Republican National Convention both helped the region shed its long-time “mistake on the lake” reputation. The burgeoning medtech sector is poised to do even more, while improving the lives of millions around the world.

Contact Nottingham Spirk to discuss how your organization can take medical innovation to the next level.