Designing a $93M Medical Technology: A Behind the Scenes Look

Excerpt from the Qmed Article:

While working a Case Western Reserve University, Yoram Rudy, PhD had the idea for a game-changing cardiac monitoring device—a vest filled with more than 200 sensors that could detect the heart’s electrical activity. While standard 12-lead EKGs had become the gold standard for detecting many heart problems, EKGs still can miss cardiac problems because they only probe electrical potential at a limited number of points on the body.

In 2004, when Rudy’s technology was featured in The New York Times, he had been working on refining the idea for 20 years. At that point, the technology was able to noninvasively detect sites initiation sites of arrhythmic activity in the heart—an unprecedented breakthrough that would ultimately attract the attention of Medtronic roughly a decade later. Rudy’s students would ultimately continue refining the technology and ultimately founded the firm CardioInsight to commercialize it, which was acquired this year for $93 million.

Before that though, the technology was a rough prototype. CardioInsight partnered with business innovation firm Nottingham Spirk (Cleveland, OH) to transform a “Frankenstein prototype” strewn with wires weighing about 15 pounds into a sleek device weighing a few ounces, explains John Nottingham, co-president and co-founder, of the Nottingham Spirk. 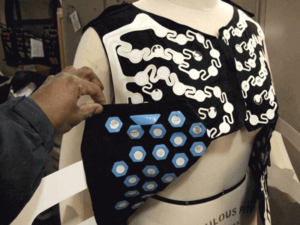 “When we were designing it, we were working directly with a flex circuit manufacturer getting the drawings ready,” says Jason Ertel, engineering program director at Nottingham Spirk. “The electrodes have diagonal shapes with little dots in the middle. We wanted to make sure the manufacturer could do it up front instead of designing the device first,” Ertel says. “Just like any design transfer process, you start early with your manufacturing folks to understand what you can accomplish as oppose to doing all of your engineering and throwing it over a wall, which is unfortunately what a lot of companies do.”

Nottingham says. “It is gamechanging. I think this will be the beginning of a whole class of products that Medtronic will offer.”