Step Away From the Desk: Chronic overwork may hinder innovation

Social media is full of posts extolling the virtues of constant work. Search Twitter or LinkedIn for #hustlehard and you’ll see what I mean. These posts are often both boastful and inspiring, but lately they’ve inspired me to think and read more about all of the possible outcomes of #thegrind, not just the successes that people like to share with the world. 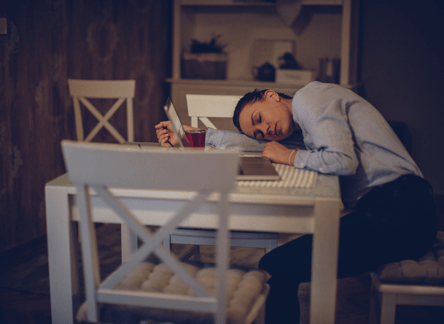 Huffington Post founder Arianna Huffington addressed this in a 2018 interview: “It’s a myth that we have to choose between ourselves and achieving our ambitions and goals. Taking care of ourselves is taking care of our goals. … It’s about realizing that creativity, decision-making, resilience, focus, attention, and productivity all improve when we’re not running on empty.”

Conversations about overwork usually focus on two sets of consequences. The first set includes things that people miss out on — time with families and friends, hobbies, even just doing nothing. The second involves the profound negative health effects, including premature aging and death. All of these things are important. But there’s another set of consequences that is often overlooked: overwork also makes us less productive workers.

In 2019, the World Health Organization included burnout as an occupational phenomenon in the International Classification of Diseases. Burnout is defined there as having three characteristics, two of which relate to effectiveness:

In 2015, Harvard Business Review provided a sobering overview of the effects beyond stress and health: impaired ability to think and communicate clearly, to make decisions, to focus. “In sum, the story of overwork is literally a story of diminishing returns: keep overworking, and you’ll progressively work more stupidly on tasks that are increasingly meaningless.”

In other words, overwork can hamper, and perhaps halt, your company’s ability to innovate.

To understand why, and how to avoid counterproductive overwork, it helps to understand the brain’s real role in the body, and the role the body plays in brain functioning.

“Your brain’s most important job isn’t thinking; it’s running the systems of your body to keep you alive and well,” writes Dr. Lisa Feldman Barrett, a neuroscientist and psychologist. “Your brain runs your body using something like a budget. … The budget for your body tracks resources like water, salt and glucose as you gain and lose them. Each action that spends resources, such as standing up, running, and learning, is like a withdrawal from your account. Actions that replenish your resources, such as eating and sleeping, are like deposits.”

Science writer Annie Murphy Paul also addresses misconceptions about the brain in her book The Extended Mind: The Power of Thinking Outside the Brain. The human brain adapted remarkably well to the sudden new demands of the 20th century and what we now call knowledge work, she explains, but one of the biggest mistakes people made in that period was thinking of our brains as computers. Unlike computers, she writes, “The way we’re able to think about information is dramatically affected by the state we’re in when we encounter it.”

“Despite the hype, our mental endowment is not boundlessly powerful or endlessly plastic. The brain has firm limits — on its ability to remember, its capacity to pay attention, its facility with abstract and nonintuitive concepts — and the culture we have created for ourselves now regularly exceeds these limits.”

There is little any of us can do to change that culture, but we can change how we operate within it. Business leaders should do everything in their power to mitigate the impact on their employees, not just for their sake, but for the company’s.

This starts with leaders modeling the habits that reduce stress and recharge the brain, like taking time off. A memo isn’t going to cut it. A 2019 survey found that 55 percent of Americans did not use all of their paid vacation time. Joan C. Williams, founding director of the Center for Work-Life Law, coined the term “flexibility stigma” to describe workers’ hesitancy to ask for flexible schedules. “Many times these policies are on the books,” she told the New York Times, “but informally everyone knows you are penalized for using them.”

Economist and author Emily Oster has written about what she calls “secret parenting,” the habit among many working parents, especially women, to avoid talking about their families or taking time off for them because “they do not want their bosses to think they are anything other than 100 percent committed” to work. She advises business leaders to talk openly about their own families and obligations and actively encourage prioritizing them.

In the office, leaders should normalize moving around and going outside as much as possible. “The brain evolved in particular settings, mostly outside,” Murphy Paul explains in an interview. “When we have to be still in an office or in a classroom, we have to inhibit our natural urge to move. And that uses up some of the mental bandwidth that could otherwise be applied to our learning or our work.

(This is why some in K-12 education are pushing for more recess.)

Leaving the office has another benefit as well — giving people time and space to think, away from colleagues. As we explained when we wrote about the open-office trend a few years ago, “To arrive at clever solutions, we need stimulation and quiet, collaboration and separation.”

Murphy Paul refers to the same need when she describes our complex thought processes as more “looping” than linear. “Let’s work with the brain as it really is,” she advises, “instead of pretending that it’s something else and getting mad at it or feeling that it’s failing when it doesn’t act like a computer.”

To be creative, we need breaks — not just adequate sleep, but short walks outside, vacations, the occasional mental health day or long weekend. We need things that help us forget work for a while — friend groups and hobbies and “guilty pleasures” (mine include music and Marvel and Star Wars movies). We need less busyness and more balance.

Find yourself crammed, overworked and in need of a break from the office? Contact us and schedule a visit to our 60,000 square-foot innovation center. Believe us when we say that our inspiring facility can help leave you feeling recharged.