CLEVELAND--(BUSINESS WIRE)--TecTraum Inc., dedicated to providing the world’s first point-of-care treatment for concussions, today announced that the U.S. Food and Drug Administration (FDA) has designated its flagship technology, pro2cool®, as a Breakthrough Device. The pro2cool System is a novel, non-invasive hypothermic therapy device designed to reduce the severity of concussion symptoms and allow patients to return to their pre-injury baseline sooner. The device provides localized cooling for the head and neck to lower blood temperature before it enters the brain. Researchers have observed significant improvements in clinical outcomes through the cooling of the brain within days of the concussion. 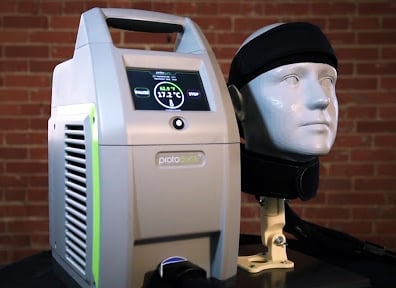 According to the U.S. Centers for Disease Control and Prevention (CDC), as many as 3.8 million sports and recreation-related concussions occur each year in the United States alone. While many people who suffer a concussion receive no medical attention, an average of 283,000 emergency department visits per year for sports and recreation–related traumatic brain injuries occurred among children during 2010 - 2016.

With the pro2cool® System receiving FDA designation as a Breakthrough Device, TecTraum is strongly positioned for revolutionizing the treatment of concussions and providing an essential medical device for young athletes. The FDA’s Breakthrough Device program is intended to offer patients and health care providers timely access to medical devices that show promise to “provide for more effective treatment or diagnosis of life-threatening or irreversibly debilitating diseases or conditions.”

“We are extremely proud to have TecTraum recognized by the FDA as a leader in concussion therapy as we work to commercialize the first-ever FDA approved treatment for concussions,” said TecTraum CEO John Zak, MD, MBA. “Although our initial focus is on filling an unmet medical need for athletes, we anticipate demonstrating in the future that people who suffer concussions caused by falls, motor vehicle accidents, or through military service also can benefit from the pro2cool® medical device.”

TecTraum developed pro2cool® through a partnership with Nottingham-Spirk, a world-renowned design firm and developer of numerous successful medical devices. Following the successful completion of pilot studies, TecTraum is nearing completion of a large multi-site pivotal clinical trial to validate the effectiveness, safety, and tolerability of the system in patients between the ages of 12 and 21.

Hypothermic therapy ("cold therapy") has been shown to have clinical efficacy in a variety of cardiovascular injuries, including cardiac arrest and myocardial infarction (heart attack). The physiologic benefit from cooling the injured region is believed to occur at the cellular level. By interrupting the body's naturally occurring localized inflammatory response with the introduction of cold therapy, the cellular metabolic cascade is dampened, thereby minimizing the ensuing damage caused by the body in response to injury.

According to Joseph Congeni, MD, director of Sports Medicine at Akron Children’s Hospital and the lead principal investigator of the multisite pivotal trial of pro2cool®, “The FDA has provided input on the design and implementation of the trial. We all recognize that concussion is a growing burden -- clinically, financially and emotionally -- in the U.S. Based on previously published data, we are hopeful that our current trial will demonstrate the efficacy, safety and tolerability of this noninvasive treatment for mild traumatic brain injury, also known as concussion.”

Although pro2cool® was originally designed for athletes, TecTraum sees potential applications for their product outside of youth sports. Whether sustaining a concussion on or off the field, TecTraum’s goal is to provide immediate, effective relief that will limit brain injury and improve patient outcomes.

TecTraum Inc. is a team of leading biomedical engineers, thriving entrepreneurs, and current and former professional athletes who are passionate about developing breakthrough technology for the treatment of concussions. At TecTraum, science comes before sales. TecTraum’s pivotal clinical trial is aimed at benefitting the medical field by providing accurate results and research-based solutions for the treatment of concussions that are proven safe and effective for all users.

For more information about pro2cool®, the ongoing clinical trial or partnering with TecTraum, visit www.tectraum.com.