Biomimicry: The Future of Innovation

Northeast Ohio has long been known as a center for medtech innovation. But there’s another sector in which Greater Cleveland is even more dominant, though this is less well known, even locally: biomimicry, the practice of looking to nature for inspiration for design, engineering and other solutions. For example, a company studied how the human heart pumps blood to design a more energy efficient automatic soap dispenser.

That company was Akron-based GOJO, one of the first to join what is now an unrivaled regional network of experts from business, science, art and education.

“We really are global leaders,” says Christine Hockman, co-director of Great Lakes Biomimicry, a nonprofit that “helps organizations learn from nature to accelerate innovation.” And fittingly for a region with a strong DIY ethic, this status grew out of the passion and hard work of a few forward-looking people.

According to Hockman, leaders of Entrepreneurs for Sustainability, a Cleveland-area business network founded in 2000, were the first to consider the possibilities that biomimicry (the term was coined in 1997) could offer the area. They met Tom Tyrrell, a former steel industry executive who later started other companies. Pressure Life magazine picks up the story from there:

As Tyrrell learned more about the field, he realized its potential impact. Tyrrell founded Great Lakes Biomimicry (GLB) in 2010 with the purpose of inspiring innovation and economic growth in the region. Around the same time, Tyrrell connected with Dr. Peter Niewiarowski, an evolutionary ecologist at the University of Akron, which led to the idea of putting together a class around the subject.

Douglas Paige, an industrial design professor at the Cleveland Institute of Art, had also already brought up the concept of biomimicry in one of his classes. After discussions with Niewiarowski, the two of them designed a GLB-funded class that combined CIA and University of Akron students. This became the first step that led to the launch of the University of Akron’s Biomimicry Research and Innovation Center (BRIC) in 2012. 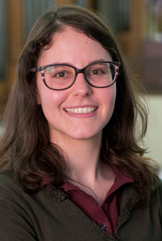 The goal, however, is not just to study, but to apply what’s learned to the real world and keep building the network. The Ph.D. candidates in BRIC and GLB’s Biomimicry Fellowship Program spend up to 20 hours per week in the local companies that sponsor them. Ariana Rupp, a Fulbright Scholar with degrees in physics engineering and product design, has been embedded at Nottingham Spirk since 2015. With her guidance, biomimicry has played a role in more than 30 client programs at NS, but her contributions have gone far beyond specific solutions.

“Ariana has brought another tool to the NS concepting process,” says Rebecca Blice, an NS project manager and biomed engineer. “With her engineering background, she is quickly able to assess the exact function we are looking to leverage within the project’s concepts, search high and low across many different nature databases for possible fits, and then understand and articulate those examples to our team. She takes it one step further, however. With her artistic background she morphs — she calls it ‘abstracting’ — the nature example into a concept for the project.

“We do so many projects in such a varied number of industries, Ariana is truly unique in her ability to jump from one project to another, finding content, distilling it, and then coming up with ideas of how nature can help us solve real pain points.”

And the possibilities are endless. Biomimicry is part of the nascent “sixth wave” of innovation, which focuses on resource efficiency and includes sustainability and green energy. Every industry will be ripe for disruption.

“Biomimicry is creating new types of feedback loops of information, and it’s even helping biology itself,” Rupp says. “There’s a new motivation to do biology in a more rigorous and systematic way. It’s really motivating the whole field, and it’s a way to make the biology curriculum more attractive to new students. I would say maybe this is the future of all science. Separations don’t really exist.”