The world is awash in plastic, and the problem is getting worse every year. More than half of the estimated 9.3 billion tons of plastic ever manufactured has been produced since 2000, and more than two-thirds (6.3 billion tons) has never been recycled. It lies in landfills and swirls through every body of water on the planet, releasing chemicals into the soil, water and food chain. 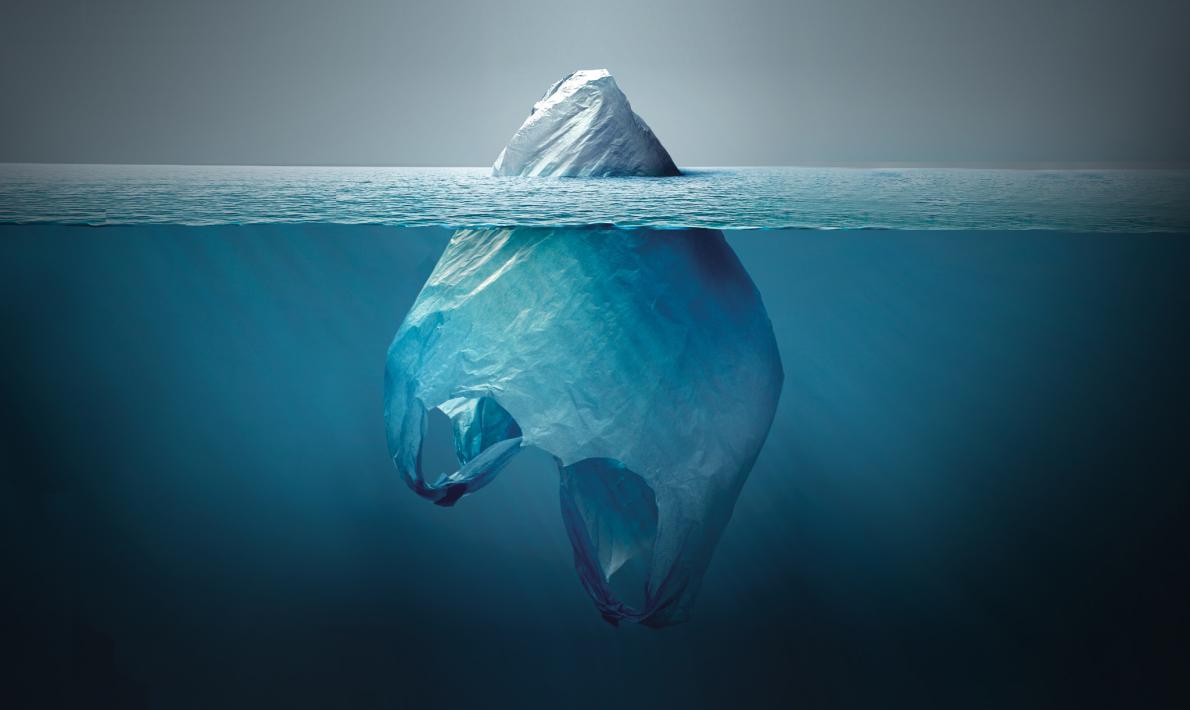 A famous National Geographic cover shows what at first looks like a giant glacier, but when you look closer, it’s actually a blue disposable shopping bag floating in water. Obviously, you can read several meanings with this image. Icebergs are said to be much larger below water than above the surface. So simply, plastic is a much larger challenge that you can initially perceive.

This crisis was decades in the making, but we don’t have decades to address it. In July, Maine passed a law that shifts the cost burden of recycling programs onto the companies that manufacture the recyclable items. A dozen other states are considering similar measures, which already exist in several other nations. Also in July, the European Union went further and banned “10 plastic products that most commonly wash up on the continent’s shores,” according to PBS Newshour. “These include, among other items, plastic bottle caps, cutlery, straws and plates, as well as Styrofoam food and beverage containers.”

While single-use plastic items like these are ubiquitous, they represent just a portion of the plastic produced and wasted every year. That’s why the EU ban is just a step toward a much larger goal: the world’s first circular plastics economy. This approach is filled with opportunity, and some smart American companies are already planning ahead.

The circular economy movement is “a collection of strategies—some old, such as reducing, reusing, and recycling, and some new, such as renting rather than owning things—that together are meant to reshape the global economy to eliminate waste,” according to National Geographic. “The circular economy doesn’t aim to end [economic] growth; it aims to bend how we do things back into harmony with nature, so that growth can continue.”

With problems, we see opportunities. And sometimes entrepreneurs can look backward in history for inspiration. Depending on your age, your parents or grandparents can probably recall the days before most packaging and containers were considered disposable. Milk delivered in glass bottles is a well-known example. In San Francisco, Dispatch Goods is “committed to making takeout more taste-y and less waste-y” by partnering with local restaurants to offer reusable packaging. A co-founder told the Wall Street Journal that the idea was inspired by news that some California cities were considering requiring restaurants to charge customers for each disposable cup or container.

For consumer products, there is a growing number of local and regional options. Boston-based Good Filling offers name-brand soaps, lotions, detergents, surface sprays, and more in reusable bottles that customers can swap for refills at “trading posts” across the market. Loop is doing something similar with a wider range of goods and in partnership with major chains like Kroger and Walgreen’s. Target is pledging that by 2040, “100% of our owned brand products [will] be designed for a circular future.”

Companies like Hydros are teaming up with Terracycle. Hydros sells an innovative line of reusable water bottles that incorporate a “Fast-Flo” filter. With Terracycle, US customers can return their used filters to be recycled. Terracycle also partners with other brands like Colgate, Bausch & Lomb, Febreze, Teva, and many more.

Upstream Solutions, a nonprofit promoting waste-reduction strategies beyond recycling, maintains a directory of like-minded companies approaching the problem from various angles. A report from the Ellen Macarthur Foundation and New Plastics Economy estimates that converting just 20 percent of plastic packaging into reuse models is a $10 billion business opportunity.

Meanwhile, shareholder pressure is moving some major corporations in the right direction, and federal legislation is on the horizon. The Break Free From Plastic Pollution Act of 2020 was reintroduced, with stronger language, in March 2021, with 94 cosponsors in the U.S. House and 10 in the Senate.

None of this is meant to suggest the transition away from heavy plastic reliance will be easy, for companies or their customers. But ironically, neither was the transition to plastic. An episode of the NPR podcast Throughline recounts the packaging-manufacturing industry’s efforts in the 1950s and ’60s to boost sales by convincing skeptical consumers to embrace the convenience of disposable bottles, cups, plates, etc. It was a massive, business-led public awareness campaign, and businesses should now be at the forefront of reversing the unintended damage.

Fortunately, consumers are more ready for the challenge today than they were when PepsiCo’s bold attempt to bring biodegradable snack bags to market was scuttled by consumer complaints that they were too noisy. This shift isn’t easy, but we are here to help. If you are looking to rethink your use of plastic, contact us.