Learning To Innovate By "Making"

We were impressed with Westlake, Ohio teacher K. Scott Kutz’s recent op-ed in the Cleveland Plain Dealer, “In Defense of Shop Class”:

You hear of middle and secondary schools that have abandoned their woodworking programs, yet at the same time we have a huge number of college graduates who owe huge student loans and cannot find jobs in the fields where they expected to find ready employment. In the meantime, jobs in high tech industries that require some basic understanding of tools and technology go unfilled because student imaginations have never become acquainted with their creative capacities.

He goes on to state, “when individuals engage in hands-on activities and learn about tools and technology, they not only ‘know’ but can also ‘do.’” Few would argue this point, but for decades, American education has been moving in the opposite direction. High schools, public and private, have phased out shop classes, and/or steered potentially college-bound students away from them. The increased focus on testing — and preparing for tests — has almost certainly exacerbated the trend. 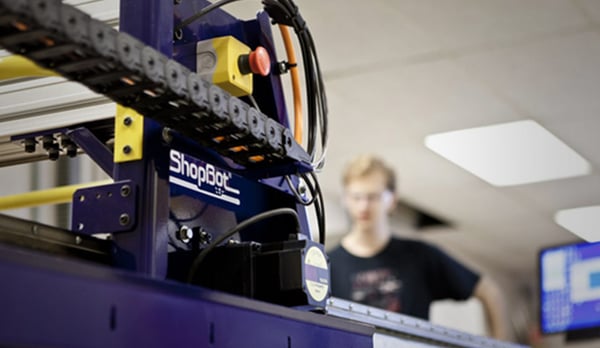 Kutz is part of a small but growing movement to reverse that trend. As in past generations, the case for shop classes is still built around employment; in Waukesha County, Wisconsin, local companies have contributed $260,000 toward a $2 million “Engineering/Manufacturing Experience space”  in a high school. (“Known more for its championship athletic programs and focus on college prep, [the school] has recognized the need to diversify its curriculum to meet different demands, said Bonnie Laugerman, director of learning.”) In Minnesota, state colleges offer “manufacturing-based summer camps for high school kids.” Still, one high school doubled its own program, “adding classes in robotics, automation and plastics. The federal grant-funded effort is in response to the needs of regional manufacturing companies.”

Bringing robotics, 3D printing and other cutting-edge technologies into high schools is great — but potentially short-sighted.

Predicting future employment trends is notoriously tricky — especially when technology is involved. Several companies are racing to perfect self-driving systems for cars and trucks, a seemingly inevitable near-future development that will radically alter numerous industries. Rise Of The Robots: Technology and The Threat Of A Jobless Future, by Martin Ford, is the latest in a series of books to warn that the current tech revolution is different, and that the implications are global and staggering:

What we’re seeing now is that as automation gets better, a lot of jobs that were once off-shored to low wage countries, especially in areas of repetitive customer service, are being replaced by things like digital voice systems.

As a result, a lot of those jobs may evaporate in the Third World. Countries like India will also try to climb up the skills ladder and go after much higher value type professional jobs. You could take a young, relatively inexperienced, but very smart worker in India or China and combine them with these very powerful artificial intelligence-enabled tools; and together they would be able to compete with a much more experienced worker in the US.

Qualities like judgement and experience, which we associate with people, are more and more being encapsulated into artificial intelligence and algorithmic approaches. In many cases, they’re doing it better [than humans].

Have you seen the video of the robot arms suturing a grape? The arms are controlled by human surgeons, but for how much longer will that be necessary? And when tasks as complicated as surgery can be automated, then virtually any industry can experience such disruptions.

We were struck by a particular passage in an essay by a former MFA writing program instructor: “If you didn’t decide to take writing seriously by the time you were a teenager, you’re probably not going to make it. … Being a writer means developing a lifelong intimacy with language. You have to be crazy about books as a kid to establish the neural architecture required to write one.”

Note that he doesn’t explain what kinds of books, or even quantify “kid.” The point is that aptitude in adults is usually traced back to early, repeated exposure to others’ work, and to the will and opportunity to try one’s own hand at creating during those years when the brain is still developing and neural pathways are being laid. College doesn’t produce good writers, it nurtures and refines the abilities that the students arrived with. We believe this is true of design, engineering and many other complex skills as well. The so-called Maker Movement isn’t driven by technology, but by people with the neural architecture to find creative uses for it.

From the very beginning, we learn by doing. Emerging science suggests that forcing children to sit still and listen all day,  and replacing play with classroom learning, have longterm, negative effects on learning. Something as simple as taking notes by hand, rather than typing them into a laptop, can make a difference.

Sir Ken Robinson, Ph.D, whose presentation “How Schools Kill Creativity”  is the most viewed TED Talk, argues in his new book, Creative Schools: The Grassroots Revolution That’s Transforming Education, that “Restoring the balance between academic and vocational programs is not just about job creation: it’s about raising standards of achievement overall.”

Students who’ve been slumbering through school wake up [in shop classes]. Those who thought they weren’t smart find that they are. Those who feared they couldn’t achieve anything discover they can. In the process, they build a stronger sense of purpose and self-respect. Kids who thought they had no chance of going to college find that they do. Those who don’t want to go to college find there are other routes in life that are just as rewarding.

If nothing else, shop classes break the monotony of the didactic method of teaching. Those who do, as well as listen, will be more likely to develop the nimble minds that the future will demand. “The future belongs to a very different kind of person,” writes Daniel Pink in A Whole New Mind: Why Right-Brainers Will Rule the Future, “with a very different kind of mind. These people — artists, inventors, designers, storytellers, caregivers, consolers, big picture thinkers — will now reap society’s richest rewards and share its greatest joys.”